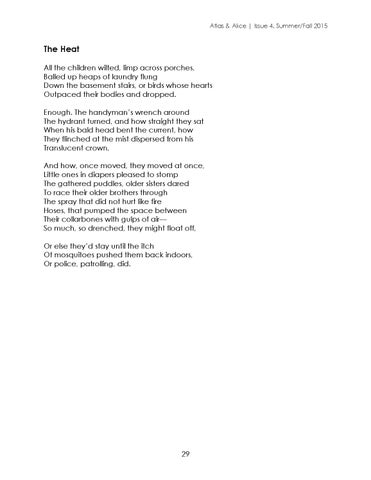 The Heat All the children wilted, limp across porches, Balled up heaps of laundry flung Down the basement stairs, or birds whose hearts Outpaced their bodies and dropped. Enough. The handyman’s wrench around The hydrant turned, and how straight they sat When his bald head bent the current, how They flinched at the mist dispersed from his Translucent crown, And how, once moved, they moved at once, Little ones in diapers pleased to stomp The gathered puddles, older sisters dared To race their older brothers through The spray that did not hurt like fire Hoses, that pumped the space between Their collarbones with gulps of air— So much, so drenched, they might float off, Or else they’d stay until the itch Of mosquitoes pushed them back indoors, Or police, patrolling, did.