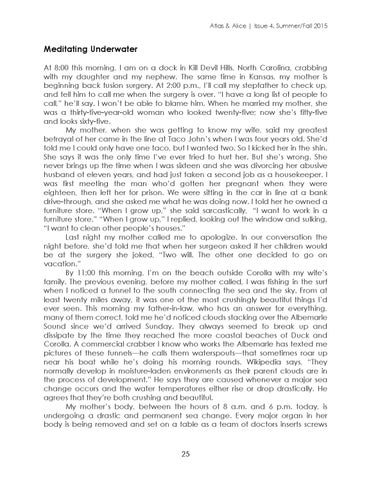 Meditating Underwater At 8:00 this morning, I am on a dock in Kill Devil Hills, North Carolina, crabbing with my daughter and my nephew. The same time in Kansas, my mother is beginning back fusion surgery. At 2:00 p.m., I’ll call my stepfather to check up, and tell him to call me when the surgery is over. “I have a long list of people to call,” he’ll say. I won’t be able to blame him. When he married my mother, she was a thirty-five-year-old woman who looked twenty-five; now she’s fifty-five and looks sixty-five. My mother, when she was getting to know my wife, said my greatest betrayal of her came in the line at Taco John’s when I was four years old. She’d told me I could only have one taco, but I wanted two. So I kicked her in the shin. She says it was the only time I’ve ever tried to hurt her. But she’s wrong. She never brings up the time when I was sixteen and she was divorcing her abusive husband of eleven years, and had just taken a second job as a housekeeper. I was first meeting the man who’d gotten her pregnant when they were eighteen, then left her for prison. We were sitting in the car in line at a bank drive-through, and she asked me what he was doing now. I told her he owned a furniture store. “When I grow up,” she said sarcastically, “I want to work in a furniture store.” “When I grow up,” I replied, looking out the window and sulking, “I want to clean other people’s houses.” Last night my mother called me to apologize. In our conversation the night before, she’d told me that when her surgeon asked if her children would be at the surgery she joked, “Two will. The other one decided to go on vacation.” By 11:00 this morning, I’m on the beach outside Corolla with my wife’s family. The previous evening, before my mother called, I was fishing in the surf when I noticed a funnel to the south connecting the sea and the sky. From at least twenty miles away, it was one of the most crushingly beautiful things I’d ever seen. This morning my father-in-law, who has an answer for everything, many of them correct, told me he’d noticed clouds stacking over the Albemarle Sound since we’d arrived Sunday. They always seemed to break up and dissipate by the time they reached the more coastal beaches of Duck and Corolla. A commercial crabber I know who works the Albemarle has texted me pictures of these funnels—he calls them waterspouts—that sometimes roar up near his boat while he’s doing his morning rounds. Wikipedia says, “They normally develop in moisture-laden environments as their parent clouds are in the process of development.” He says they are caused whenever a major sea change occurs and the water temperatures either rise or drop drastically. He agrees that they’re both crushing and beautiful. My mother’s body, between the hours of 8 a.m. and 6 p.m. today, is undergoing a drastic and permanent sea change. Every major organ in her body is being removed and set on a table as a team of doctors inserts screws