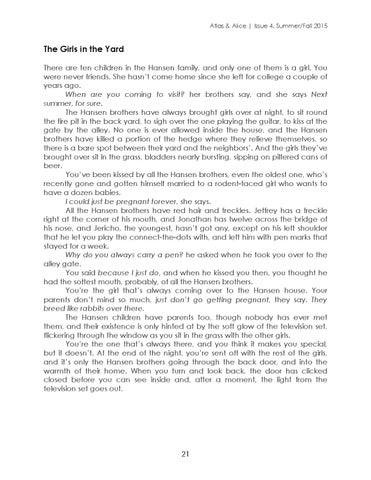 The Girls in the Yard There are ten children in the Hansen family, and only one of them is a girl. You were never friends. She hasn’t come home since she left for college a couple of years ago. When are you coming to visit? her brothers say, and she says Next summer, for sure. The Hansen brothers have always brought girls over at night, to sit round the fire pit in the back yard, to sigh over the one playing the guitar, to kiss at the gate by the alley. No one is ever allowed inside the house, and the Hansen brothers have killed a portion of the hedge where they relieve themselves, so there is a bare spot between their yard and the neighbors’. And the girls they’ve brought over sit in the grass, bladders nearly bursting, sipping on pilfered cans of beer. You’ve been kissed by all the Hansen brothers, even the oldest one, who’s recently gone and gotten himself married to a rodent-faced girl who wants to have a dozen babies. I could just be pregnant forever, she says. All the Hansen brothers have red hair and freckles. Jeffrey has a freckle right at the corner of his mouth, and Jonathan has twelve across the bridge of his nose, and Jericho, the youngest, hasn’t got any, except on his left shoulder that he let you play the connect-the-dots with, and left him with pen marks that stayed for a week. Why do you always carry a pen? he asked when he took you over to the alley gate. You said because I just do, and when he kissed you then, you thought he had the softest mouth, probably, of all the Hansen brothers. You’re the girl that’s always coming over to the Hansen house. Your parents don’t mind so much, just don’t go getting pregnant, they say. They breed like rabbits over there. The Hansen children have parents too, though nobody has ever met them, and their existence is only hinted at by the soft glow of the television set, flickering through the window as you sit in the grass with the other girls. You’re the one that’s always there, and you think it makes you special, but it doesn’t. At the end of the night, you’re sent off with the rest of the girls, and it’s only the Hansen brothers going through the back door, and into the warmth of their home. When you turn and look back, the door has clicked closed before you can see inside and, after a moment, the light from the television set goes out.