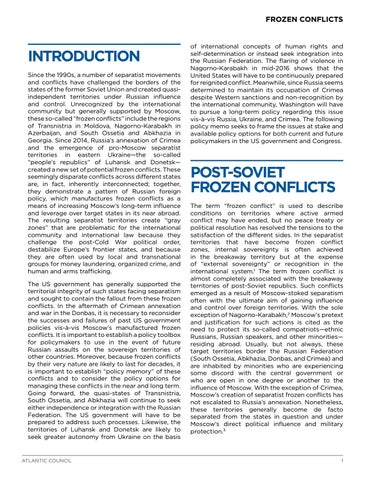 INTRODUCTION Since the 1990s, a number of separatist movements and conflicts have challenged the borders of the states of the former Soviet Union and created quasiindependent territories under Russian influence and control. Unrecognized by the international community but generally supported by Moscow, these so-called “frozen conflicts” include the regions of Transnistria in Moldova, Nagorno-Karabakh in Azerbaijan, and South Ossetia and Abkhazia in Georgia. Since 2014, Russia’s annexation of Crimea and the emergence of pro-Moscow separatist territories in eastern Ukraine—the so-called “people’s republics” of Luhansk and Donetsk— created a new set of potential frozen conflicts. These seemingly disparate conflicts across different states are, in fact, inherently interconnected; together, they demonstrate a pattern of Russian foreign policy, which manufactures frozen conflicts as a means of increasing Moscow’s long-term influence and leverage over target states in its near abroad. The resulting separatist territories create “gray zones” that are problematic for the international community and international law because they challenge the post-Cold War political order, destabilize Europe’s frontier states, and because they are often used by local and transnational groups for money laundering, organized crime, and human and arms trafficking. The US government has generally supported the territorial integrity of such states facing separatism and sought to contain the fallout from these frozen conflicts. In the aftermath of Crimean annexation and war in the Donbas, it is necessary to reconsider the successes and failures of past US government policies vis-à-vis Moscow’s manufactured frozen conflicts. It is important to establish a policy toolbox for policymakers to use in the event of future Russian assaults on the sovereign territories of other countries. Moreover, because frozen conflicts by their very nature are likely to last for decades, it is important to establish “policy memory” of these conflicts and to consider the policy options for managing these conflicts in the near and long term. Going forward, the quasi-states of Transnistria, South Ossetia, and Abkhazia will continue to seek either independence or integration with the Russian Federation. The US government will have to be prepared to address such processes. Likewise, the territories of Luhansk and Donetsk are likely to seek greater autonomy from Ukraine on the basis

of international concepts of human rights and self-determination or instead seek integration into the Russian Federation. The flaring of violence in Nagorno-Karabakh in mid-2016 shows that the United States will have to be continuously prepared for reignited conflict. Meanwhile, since Russia seems determined to maintain its occupation of Crimea despite Western sanctions and non-recognition by the international community, Washington will have to pursue a long-term policy regarding this issue vis-à-vis Russia, Ukraine, and Crimea. The following policy memo seeks to frame the issues at stake and available policy options for both current and future policymakers in the US government and Congress.

POST-SOVIET FROZEN CONFLICTS The term “frozen conflict” is used to describe conditions on territories where active armed conflict may have ended, but no peace treaty or political resolution has resolved the tensions to the satisfaction of the different sides. In the separatist territories that have become frozen conflict zones, internal sovereignty is often achieved in the breakaway territory but at the expense of “external sovereignty” or recognition in the international system.1 The term frozen conflict is almost completely associated with the breakaway territories of post-Soviet republics. Such conflicts emerged as a result of Moscow-stoked separatism often with the ultimate aim of gaining influence and control over foreign territories. With the sole exception of Nagorno-Karabakh,2 Moscow’s pretext and justification for such actions is cited as the need to protect its so-called compatriots—ethnic Russians, Russian speakers, and other minorities— residing abroad. Usually, but not always, these target territories border the Russian Federation (South Ossetia, Abkhazia, Donbas, and Crimea) and are inhabited by minorities who are experiencing some discord with the central government or who are open in one degree or another to the influence of Moscow. With the exception of Crimea, Moscow’s creation of separatist frozen conflicts has not escalated to Russia’s annexation. Nonetheless, these territories generally become de facto separated from the states in question and under Moscow’s direct political influence and military protection.3 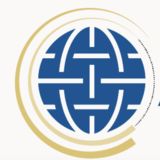 “Since the 1990s, a number of separatist movements and conflicts have challenged the borders of the states of the former Soviet Union and cr...

“Since the 1990s, a number of separatist movements and conflicts have challenged the borders of the states of the former Soviet Union and cr...