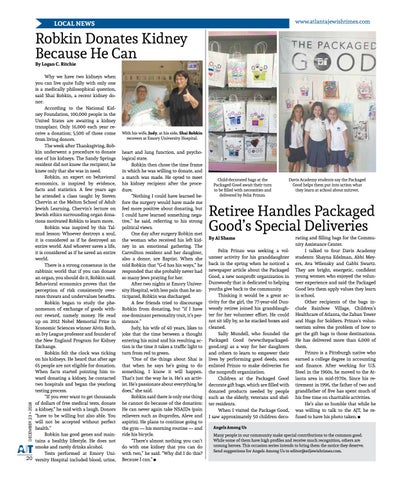 Robkin Donates Kidney Because He Can By Logan C. Ritchie

Why we have two kidneys when you can live quite fully with only one is a medically philosophical question, said Shai Robkin, a recent kidney donor. According to the National Kidney Foundation, 100,000 people in the United States are awaiting a kidney transplant. Only 16,000 each year receive a donation; 5,500 of those come from living donors. The week after Thanksgiving, Robkin underwent a procedure to donate one of his kidneys. The Sandy Springs resident did not know the recipient; he knew only that she was in need. Robkin, an expert on behavioral economics, is inspired by evidence, facts and statistics. A few years ago he attended a class taught by Steven Chervin at the Melton School of Adult Jewish Learning. Chervin’s lecture on Jewish ethics surrounding organ donations motivated Robkin to learn more. Robkin was inspired by this Talmud lesson: Whoever destroys a soul, it is considered as if he destroyed an entire world. And whoever saves a life, it is considered as if he saved an entire world. There is a strong consensus in the rabbinic world that if you can donate an organ, you should do it, Robkin said. Behavioral economics proves that the perception of risk consistently overrates threats and undervalues benefits. Robkin began to study the phenomenon of exchange of goods without reward, namely money. He read up on 2012 Nobel Memorial Prize in Economic Sciences winner Alvin Roth, an Ivy League professor and founder of the New England Program for Kidney Exchange. Robkin felt the clock was ticking on his kidneys. He heard that after age 65 people are not eligible for donation. When facts started pointing him toward donating a kidney, he contacted two hospitals and began the yearlong testing process. “If you ever want to get thousands of dollars of free medical tests, donate a kidney,” he said with a laugh. Donors “have to be willing but also able. You will not be accepted without perfect health.” Robkin has good genes and maintains a healthy lifestyle. He does not smoke and rarely drinks alcohol. Tests performed at Emory Uni20 versity Hospital included blood, urine,

With his wife, Judy, at his side, Shai Robkin recovers at Emory University Hospital.

heart and lung function, and psychological state. Robkin then chose the time frame in which he was willing to donate, and a match was made. He opted to meet his kidney recipient after the procedure. “Nothing I could have learned before the surgery would have made me feel more positive about donating, but I could have learned something negative,” he said, referring to his strong political views. One day after surgery Robkin met the woman who received his left kidney in an emotional gathering. The Carrollton resident and her daughter, also a donor, are Baptist. When she told Robkin that “G-d has his ways,” he responded that she probably never had so many Jews praying for her. After two nights at Emory University Hospital, with less pain than he anticipated, Robkin was discharged. A few friends tried to discourage Robkin from donating, but “if I have one dominant personality trait, it’s persistence.” Judy, his wife of 40 years, likes to joke that the time between a thought entering his mind and his resulting action is the time it takes a traffic light to turn from red to green. “One of the things about Shai is that when he says he’s going to do something, I know it will happen. That’s just the way he is. He’s an activist. He’s passionate about everything he does,” she said. Robkin said there is only one thing he cannot do because of the donation: He can never again take NSAIDs (pain relievers such as ibuprofen, Aleve and aspirin). He plans to continue going to the gym — his morning routine — and ride his bicycle. “There’s almost nothing you can’t do with one kidney that you can do with two,” he said. “Why did I do this? Because I can.” ■

Child-decorated bags at the Packaged Good await their turn to be filled with necessities and delivered by Felix Prinzo.

Davis Academy students say the Packaged Good helps them put into action what they learn at school about mitzvot.

Retiree Handles Packaged Good’s Special Deliveries By Al Shams Felix Prinzo was seeking a volunteer activity for his granddaughter back in the spring when he noticed a newspaper article about the Packaged Good, a new nonprofit organization in Dunwoody that is dedicated to helping youths give back to the community. Thinking it would be a great activity for the girl, the 77-year-old Dunwoody retiree joined his granddaughter for her volunteer effort. He could not sit idly by, so he stacked boxes and cleaned. Sally Mundell, who founded the Packaged Good (www.thepackagedgood.org) as a way for her daughters and others to learn to empower their lives by performing good deeds, soon enlisted Prinzo to make deliveries for the nonprofit organization. Children at the Packaged Good decorate gift bags, which are filled with donated products needed by people such as the elderly, veterans and shelter residents. When I visited the Package Good, I saw approximately 50 children deco-

rating and filling bags for the Community Assistance Center. I talked to four Davis Academy students: Shayna Edelman, Abbi Meyers, Ava Wilensky and Gabbi Swartz. They are bright, energetic, confident young women who enjoyed the volunteer experience and said the Packaged Good lets them apply values they learn in school. Other recipients of the bags include Rainbow Village, Children’s Healthcare of Atlanta, the Zaban Tower and Hugs for Soldiers. Prinzo’s volunteerism solves the problem of how to get the gift bags to those destinations. He has delivered more than 6,000 of them. Prinzo is a Pittsburgh native who earned a college degree in accounting and finance. After working for U.S. Steel in the 1960s, he moved to the Atlanta area in mid-1970s. Since his retirement in 1996, the father of two and grandfather of five has spent much of his free time on charitable activities. He’s also so humble that while he was willing to talk to the AJT, he refused to have his photo taken. ■

Angels Among Us Many people in our community make special contributions to the common good. While some of them have high profiles and receive much recognition, others are unsung heroes. This occasion series intends to bring them the notice they deserve. Send suggestions for Angels Among Us to editor@atljewishtimes.com. 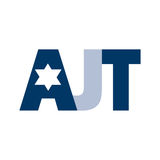