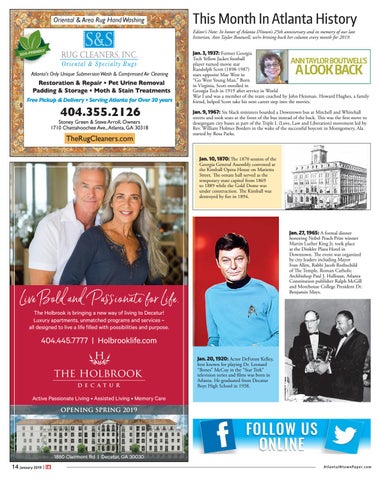 This Month In Atlanta History Editor’s Note: In honor of Atlanta INtown’s 25th anniversary and in memory of our late historian, Ann Taylor Boutwell, we’re brining back her column every month for 2019.

A DIVISION OF S&amp;S RUG CLEANERS

Jan. 9, 1967: Six black ministers boarded a Downtown bus at Mitchell and Whitehall streets and took seats at the front of the bus instead of the back. This was the first move to desegregate city buses as part of the Triple L (Love, Law and Liberation) movement led by Rev. William Holmes Borders in the wake of the successful boycott in Montgomery, Ala. started by Rosa Parks.

Jan. 10, 1870: The 1870 session of the Georgia General Assembly convened at the Kimball Opera House on Marietta Street. The ornate hall served as the temporary state capitol from 1869 to 1889 while the Gold Dome was under construction. The Kimball was destroyed by fire in 1894.

Live Bold and Passionate for Life. The Holbrook is bringing a new way of living to Decatur! Luxury apartments, unmatched programs and services – all designed to live a life filled with possibilities and purpose.

The January issue features our 11th annual 20 Under 20 honorees – students who have given back in significant ways to the community. From countless hours of volunteer service to creating their own nonprofits, these young people are doing extraordinary things to help those in need. In this issue you'll also find our real estate forecast for 2019, an interview with Chef Guy Wong, and we profile music icon Beverly "Guitar" Watkins. Atlanta INtown is marking its 25th anniversary in 2019, so be sure the watch for special stories and features all year long. 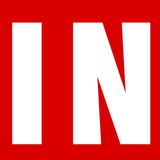