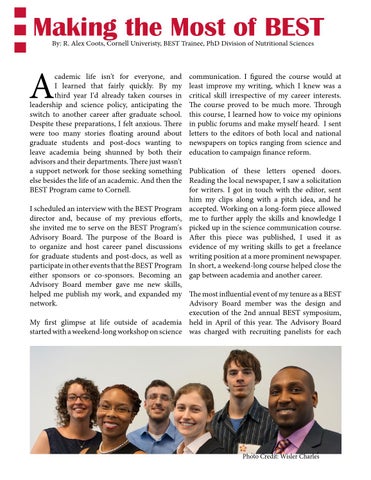 cademic life isn&#39;t for everyone, and I learned that fairly quickly. By my third year I&#39;d already taken courses in leadership and science policy, anticipating the switch to another career after graduate school. Despite these preparations, I felt anxious. There were too many stories floating around about graduate students and post-docs wanting to leave academia being shunned by both their advisors and their departments. There just wasn&#39;t a support network for those seeking something else besides the life of an academic. And then the BEST Program came to Cornell.

communication. I figured the course would at least improve my writing, which I knew was a critical skill irrespective of my career interests. The course proved to be much more. Through this course, I learned how to voice my opinions in public forums and make myself heard. I sent letters to the editors of both local and national newspapers on topics ranging from science and education to campaign finance reform. Publication of these letters opened doors. Reading the local newspaper, I saw a solicitation for writers. I got in touch with the editor, sent him my clips along with a pitch idea, and he accepted. Working on a long-form piece allowed me to further apply the skills and knowledge I picked up in the science communication course. After this piece was published, I used it as evidence of my writing skills to get a freelance writing position at a more prominent newspaper. In short, a weekend-long course helped close the gap between academia and another career.

I scheduled an interview with the BEST Program director and, because of my previous efforts, she invited me to serve on the BEST Program&#39;s Advisory Board. The purpose of the Board is to organize and host career panel discussions for graduate students and post-docs, as well as participate in other events that the BEST Program either sponsors or co-sponsors. Becoming an Advisory Board member gave me new skills, helped me publish my work, and expanded my The most influential event of my tenure as a BEST network. Advisory Board member was the design and execution of the 2nd annual BEST symposium, My first glimpse at life outside of academia held in April of this year. The Advisory Board started with a weekend-long workshop on science was charged with recruiting panelists for each 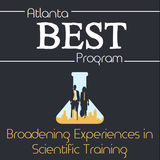