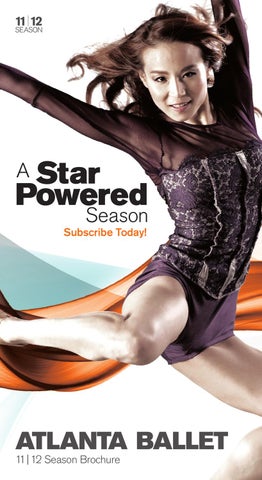 HERE. OW. IN ATL. 2011 2012 SEASON 5XZMB 5IBSQ t +PSNB &amp;MP t +BNFT ,VEFMLB 8BZOF .D(SFHPS t $ISJTUPQIFS 8IFFMEPO Atlanta Ballet is bringing the world to Atlanta with a breakout, star-powered season that includes some of the worldâ&amp;#x20AC;&amp;#x2122;s most influential living choreographers. With ingenuity and boldness, Atlanta Ballet is set to become the epicenter of dance with inventive new choreographic voices, world premiere collaborations and beloved classics. Thereâ&amp;#x20AC;&amp;#x2122;s no need to travel to see where dance is headed. This season, Atlanta Ballet introduces you to the modern pioneers of dance and presents you with an extraordinary opportunity to experience the work of five creative visionaries brought to life by Atlanta Ballet dancers. The most celebrated choreographers in the world are Here. Now. In Atlanta.

!&quot;#$%&amp;!&#39;%() Dance legend, Twyla Tharp, has choreographed more than one hundred thirty-five dances, five Hollywood movies, and directed and choreographed four Broadway shows. One of her most notable successes was the Broadway musical â&amp;#x20AC;&amp;#x153;Movinâ&amp;#x20AC;&amp;#x2122; Out,â&amp;#x20AC;? a dance narrative set to the music of Billy Joel, which won her a Tony Award for Best Choreography. Tharp also conceived and choreographed Come Fly Away which premiered on the Alliance Stage in 2009. Her prolific catalog spans genres and generations, including blockbuster productions on Broadway and in Las Vegas, and Hollywood screen credits in movies like Hair, Amadeus, and Ragtime. Tharp is the recipient of nineteen honorary doctorates, a Tony Award, two Emmy Awards, the 2004 National Medal of the Arts, the 2008 Jerome Robbins Prize, and a 2008 Kennedy Center Honor.

A country music legend, one of the most sought-after choreographers in the world, and an explosive modern performance make this March weekend not-to-be-missed.

James Kudelka’s Man in Black delivers imaginative choreography over a mix of hits and hidden gems by rockabilly legend Johnny Cash. Jorma Elo’s ultra-modern First Flash imbues modern elements of speed and athleticism and demonstrates why he was singled out as a “talent to follow” in the New York Times’ Year In Review. Christopher Wheeldon’s thrilling masterpiece Rush, starring stunning graceful dancers, surges forth with searing beauty and movement. Atlanta Ballet truly brings you the world this weekend.

SNOW WHITE Choreographed by Bruce Wells February 18 , 2012 at 2:00pm Location Cobb Energy Performing Arts Centre See the magic unfold in this one-hour family performance of the classic fairytale Snow White. This enchanting fantasy stars all of your favorites – Prince Charming, the wicked Queen, and of course, Snow White. It’s the perfect way to begin a lifelong love of the arts – an event your whole family will remember happily ever after! Sponsored by:

Add this charming family classic to your package! See back for your special subscriber price.

*+(,%&amp;-$+ A former hockey goalie, Finnish choreographer Jorma Elo turned to dance to improve his agility – and found he was quite good at it. In 1978, he joined the Finnish National Ballet and later danced with Cullberg Ballet and Netherlands Dance Theatre. Throughout his dance career, Elo choreographed major works for the world’s best dance companies. Since becoming the Resident Choreographer of Boston Ballet in 2005, Elo has received numerous awards including the Prince Charitable Trust Prize and the Choo-San Goh Choreographic Award in 2006, and Esquire Magazine named him a “Master Artist” in 2008.

*%,./&amp; 012.$3% Canadian-born James Kudelka has gained significant prominence among today’s choreographers, his artistic achievements officially recognized with his 2005 appointment as an Officer of the Order of Canada. He now focuses on collaborative choreographic projects that inspire his curiosity and which continue to earn him wide respect as one of today’s most accomplished, courageous, and distinctive dance makers.

NEW CHOREOGRAPHIC VOICES Location Alliance Stage at The Woodruff Arts Center An evening of world premieres from some of the world’s most talented choreographers. Expect a vibrant evening of artistic vision – daring and altogether new movement, music and diversity.

Wayne McGregor CBE is a multi award-winning British choreographer, renowned for his physically testing choreography and ground-breaking collaborations across dance, film, music, visual art, technology and science. He is the Artistic Director of Wayne McGregor | Random Dance, Resident Choreographer at Sadler’s Wells Theatre, and the Resident Company of The Royal Ballet (2006). Known for a style that investigates the science between the human mind and body, McGregor was chosen as a Research Fellow in the Experimental Psychology department of Cambridge University.

Christopher Wheeldon has established himself as one of the premier choreographers of his generation. Born in England in 1973, he joined the Royal Ballet at 17, and won the gold medal at the Prix de Lausanne competition the same year. Wheeldon later joined New York City Ballet and was elevated to soloist in 1998. He established his own dance company, Morphoses, in 2007, and resigned three years later to pursue freelance choreography. Critics routinely praise his wit and imagination and point to his keen musicality, mastery of stage space, and inventive partnering.

January 12 â&amp;#x20AC;&amp;#x201C; 14, 2012 Choreographed by Shawn Hounsell Location Cobb Energy Performing Arts Centre Wonderland is a dynamic re-interpretation of Lewis Carrollâ&amp;#x20AC;&amp;#x2122;s beloved characters, events and themes that is sure to surprise and delight. The Queen of Hearts, the White Rabbit, and the Mad Hatter are all on hand, displaying generous doses of wit, camp and humour. The surreal and dark elements that lurk at the original storyâ&amp;#x20AC;&amp;#x2122;s fringes are bravely realized in explosive passages of breathtaking dance and innovative multimedia. Shawn Hounsell, acclaimed choreographer and RWB alumnus, has transformed Wonderland into a multi-sensory experience, with edgy and athletic movement, an inventive electro-acoustic soundscape, and unexpected visual treats. This is Alice like youâ&amp;#x20AC;&amp;#x2122;ve never seen her before! Contemporary interpretation of story. Themes suitable for age 6 and older.

(0-% $*3$-&amp; 4&amp;&quot;5*/( Enjoy our top tier by joining our Gold Circle with an annual minimum donation of $2,500. Enjoy first access to the very best seats in the house and the Dorothy Alexander Donor Lounge during intermission. For more information, please contact our Development department at 404.873.5811. **Gold Circle Seating prices include $2500 donation.

:06 .&quot;,&amp; *5 )&quot;11&amp;/ Atlanta Ballet depends on donations and in-kind support to provide approximately one-half of our annual operating costs. This is why your gift is so vital. With your help, Atlanta Ballet will continue to provide quality arts programming and arts education opportunities for all. Please consider making a contribution to Atlanta Ballet along with your ticket order. Thank you!

Online: atlantaballet.com (save the $10 handling fee!)