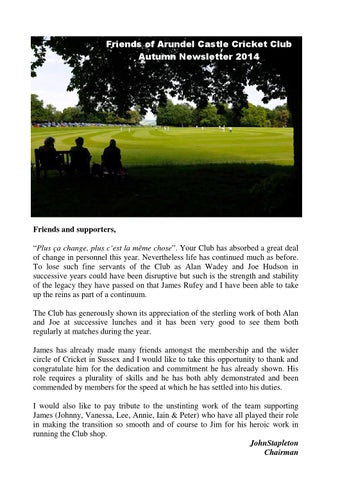 Friends and supporters, “Plus ça change, plus c’est la même chose”. Your Club has absorbed a great deal of change in personnel this year. Nevertheless life has continued much as before. To lose such fine servants of the Club as Alan Wadey and Joe Hudson in successive years could have been disruptive but such is the strength and stability of the legacy they have passed on that James Rufey and I have been able to take up the reins as part of a continuum. The Club has generously shown its appreciation of the sterling work of both Alan and Joe at successive lunches and it has been very good to see them both regularly at matches during the year.

We are very grateful to Mr. Charles Hunt and Blue Spire Accounting for their support with this Newsletter.

James has already made many friends amongst the membership and the wider circle of Cricket in Sussex and I would like to take this opportunity to thank and congratulate him for the dedication and commitment he has already shown. His role requires a plurality of skills and he has both ably demonstrated and been commended by members for the speed at which he has settled into his duties. I would also like to pay tribute to the unstinting work of the team supporting James (Johnny, Vanessa, Lee, Annie, Iain & Peter) who have all played their role in making the transition so smooth and of course to Jim for his heroic work in running the Club shop. JohnStapleton Chairman