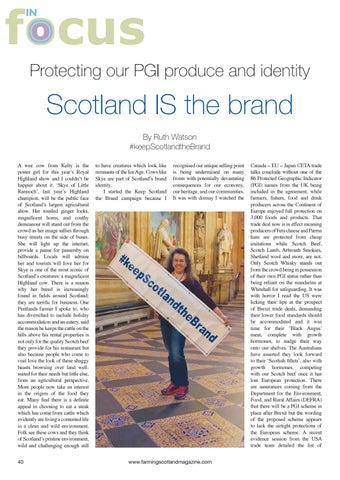 Protecting our PGI produce and identity

Scotland IS the brand By Ruth Watson #keepScotlandtheBrand A wee cow from Kelty is the poster girl for this year’s Royal Highland show and I couldn’t be happier about it. ‘Skye of Little Rannoch’, last year’s Highland champion, will be the public face of Scotland’s largest agricultural show. Her tousled ginger locks, magnificent horns, and couthy demeanour will stand out from the crowd as her image sallies through busy streets on the side of buses. She will light up the internet, provide a pause for passersby on billboards. Locals will admire her and tourists will love her for Skye is one of the most iconic of Scotland’s creatures: a magnificent Highland cow. There is a reason why her breed is increasingly found in fields around Scotland: they are terrific for business. One Pentlands farmer I spoke to, who has diversified to include holiday accommodation and an eatery, said the reason he keeps the cattle on the hills above his rental properties is not only for the quality Scotch beef they provide for his restaurant but also because people who come to visit love the look of these shaggy beasts browsing over land wellsuited for their needs but little else, from an agricultural perspective. More people now take an interest in the origins of the food they eat. Many find there is a definite appeal in choosing to eat a steak which has come from cattle which evidently are living a contented life in a clean and wild environment. Folk see these cows and they think of Scotland’s pristine environment, wild and challenging enough still 40

to have creatures which look like remnants of the Ice Age. Cows like Skye are part of Scotland’s brand identity. I started the Keep Scotland the Brand campaign because I

recognised our unique selling point is being undermined on many fronts with potentially devastating consequences for our economy, our heritage, and our communities. It was with dismay I watched the

Canada – EU – Japan CETA trade talks conclude without one of the 86 Protected Geographic Indicator (PGI) names from the UK being included in the agreement, while farmers, fishers, food and drink producers across the Continent of Europe enjoyed full protection on 3,000 foods and products. That trade deal now is in effect meaning producers of Feta cheese and Parma ham are protected from cheap imitations while Scotch Beef, Scotch Lamb, Arbroath Smokies, Shetland wool and more, are not. Only Scotch Whisky stands out from the crowd being in possession of their own PGI status rather than being reliant on the mandarins at Whitehall for safeguarding. It was with horror I read the US were licking their lips at the prospect of Brexit trade deals, demanding their lower food standards should be accommodated and it was time for their ‘Black Angus’ meat, complete with growth hormones, to nudge their way onto our shelves. The Australians have asserted they look forward to their ‘Scottish fillets’, also with growth hormones, competing with our Scotch beef once it has lost European protection. There are assurances coming from the Department for the Environment, Food, and Rural Affairs (DEFRA) that there will be a PGI scheme in place after Brexit but the wording of the proposed scheme appears to lack the airtight protections of the European scheme. A recent evidence session from the USA trade team detailed the list of 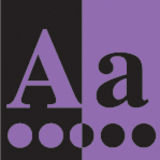