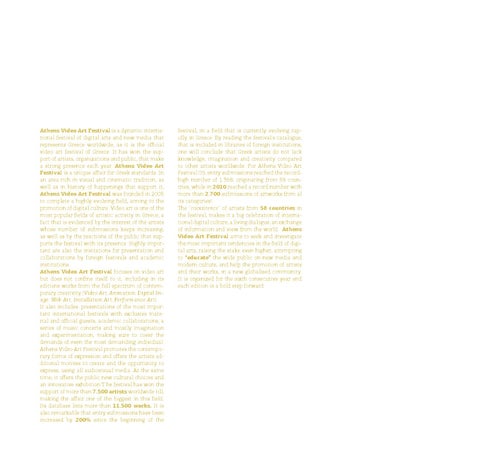 Athens Video Art Festival is a dynamic international festival of digital arts and new media that represents Greece worldwide, as it is the official video art festival of Greece. It has won the support of artists, organizations and public, that make a strong presence each year. Athens Video Art Festival is a unique affair for Greek standards. In an area rich in visual and cinematic tradition, as well as in history of happenings that support it, Athens Video Art Festival was founded in 2005 to complete a highly evolving field, aiming to the promotion of digital culture. Video art is one of the most popular fields of artistic activity in Greece, a fact that is evidenced by the interest of the artists whose number of submissions keeps increasing, as well as by the reactions of the public that supports the festival with its presence. Highly important are also the invitations for presentation and collaborations by foreign festivals and academic institutions. Athens Video Art Festival focuses on video art but does not confine itself to it, including in its editions works from the full spectrum of contemporary creativity (Video Art, Animation, Digital Image, Web Art, Installation Art, Performance Art). It also includes: presentations of the most important international festivals with exclusive material and official guests, academic collaborations, a series of music concerts and mostly imagination and experimentation, making sure to cover the demands of even the most demanding individual. Athens Video Art Festival promotes the contemporary forms of expression and offers the artists additional motives to create and the opportunity to express, using all audiovisual media. At the same time, it offers the public new cultural choices and an innovative exhibition.T he festival has won the support of more than 7.500 artists worldwide till, making the affair one of the biggest in this field. Its database lists more than 11.500 works. It is also remarkable that entry submissions have been increased by 200% since the beginning of the

festival, in a field that is currently evolving rapidly in Greece. By reading the festival’s catalogue, that is included in libraries of foreign institutions, one will conclude that Greek artists do not lack knowledge, imagination and creativity compared to other artists worldwide. For Athens Video Art Festival 09, entry submissions reached the recordhigh number of 1.368, originating from 58 countries, while in 2010 reached a record number with more than 2.700 submissions of artworks from al its categories! The “coexistence” of artists from 58 countries in the festival, makes it a big celebration of international digital culture, a living dialogue, an exchange of information and view from the world. Athens Video Art Festival aims to seek and investigate the most important tendencies in the field of digital arts, raising the stake even higher, attempting to “educate” the wide public on new media and modern culture, and help the promotion of artists and their works, in a new globalised community. It is organized for the sixth consecutive year and each edition is a bold step forward.

The sixth edition of the International Festival of Digital Arts and New Media, Athens Video Art Festival, took place in May 2010 at multispace «Technopolis» of Municipality of Athens and the Greek Film Museum. More than 2700 artists both from Greece and abroad submitted their artworks and more than 13000 visitors honored it with their presence. In its context, it included several categories such as Video Art, Video Installations, Installation Art, Performance Art, Web Art, Animation and Digital Image. 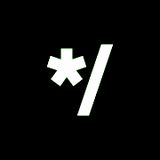