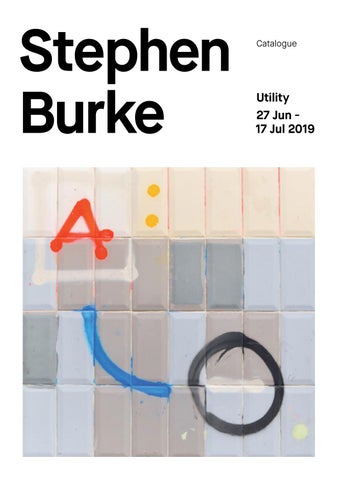 Introduction The second instalment of Atelier Maser’s 2019 exhibition programme is ‘Utility’, a solo exhibition of work by Stephen Burke. Stephen is a contemporary Irish artist, currently living and working in Glasgow, Scotland. Since the age of fifteen Stephen has grown strong roots in the Irish street art community, and in more recent years, he has evolved his artistic practice into the realm of fine arts. Stephen has exhibited extensively across Ireland and the UK, including shows at Glasgow School of Art (UK), The Law Society of Ireland (IRL) and The Pipe Factory (UK). Having received a Master’s in Fine Art Painting from Glasgow School of Art in 2018, Stephen’s creative practice is heavily influenced by the urban landscape. He creates work inspired by our shared public places and in doing so, he diverts our perception away from the conventional ideals associated with these spaces. The resulting artworks strive to bring a broader interest in the many irregular characteristics which make up our built environment. For ‘Utility’, Stephen’s exhibition at Atelier Maser, visitors will have the opportunity to see a new body of work which includes a collection of tiled paintings and a steel sculpture that are informed by, and recollective of the city landscape.

“I’d like people to take more notice of their surroundings, there’s lots to see once you begin to deconstruct the traditional ideas of what art is and where you can find it. There’s truth to the theory of ‘life imitates art’.” Stephen Burke 2

The Concept Stephen’s artistic practice is heavily informed by graffiti, or more specifically, the removal of it. ‘Buffing’ is the name given to describe the removal or the painting over of graffiti. It is a daily task undertaken by councils, private home owners and contracted companies around the world, and, it is also the basis for Stephen’s artwork. Through many years of investigation, and documentation, his work is developed from the perspective that buffing can be identified, and be critically engaged with, as a creative artform itself. To many, buffing may look like blocks of paint applied for practical reasons and easy to ignore but to the artist, they illustrate elements of abstract painting and performance art which can be seen throughout the city. And interestingly, his findings suggest that the different styles of buffing vary depending on the socio-economic class of the area that it is in. Another large part of Stephen’s artistic practice, is its commentary on the youth culture of today. The large freestanding steel sculpture that Stephen has created for ‘Utility’ illuminates the physical impact of cars crashing into street barriers - the results of machismo episodes within young people. The sculpture demands recognition and presence within the gallery space, similar to the demands of the youth that inhabit any city.

The Process Stephenâ&amp;#x20AC;&amp;#x2122;s work usually takes shape through the mediums of paint, tiles and steel. The skeleton of each piece comprises of three specific elements: 1. The buff 2. The tiles 3. The construction markings Using the documentation of buffing as the starting point for each piece, Stephen progresses his ideas intuitively through a labour intensive fabrication process of tiling, welding, painting, layering, buffing and editing. Not only do buffs inspire his work, but with the use of considered layering and abrasion techniques - the physical process of buffing can be seen in his pieces also. Since living in Scotland, Stephenâ&amp;#x20AC;&amp;#x2122;s artwork has been inspired by the urban environment of Glasgow which is portrayed through his use of tiling. Tiles are widespread throughout Glasgow city and are commonly seen in the communal hallways of the tenement buildings which house most of the city. Since the 19th Century - reminiscent of a time when disease and poverty was rapid, tiles were used as an attempt to limit infections as they were easier to clean. Interestingly, tiles are also an intrinsic element of subway stations, a setting that is romantically associated with street art and graffiti. The construction markings in his work are inspired by the sprayed instructions commonly seen on city streets. These markings are issued by utility companies as functional instructions for its staff to lay gas and water pipes or electricity lines. Stephen has decoded the language used in these utility markings, and now he uses the markings to tell coded narratives within his art work. Viewers are encouraged to decode the meaning of these varied sprayed marks for themselves.

Related Projects In addition to the exhibition at Atelier Maser, visitors will have the opportunity to watch a short film that Stephen has created in collaboration with Irish film maker, Sean Clarke. Captured over the last three years, this 16 minute feature is set in Dublin city and investigates the style and psychology behind buffing in Ireland. In 2016, Stephen co-authored a book entitled ‘Buff’, alongside Irish photographer Fiachra Corcoran. The book documented the styles of buffing throughout Dublin. In addition to this documentation, Stephen and Fiachra coined the phrases ‘Etched removal’ and ‘Maltreated removal’ during this project. These new buffing categories are now widely recognised when referencing these styles of erasure. Stephen is also the founder of ‘Post Vandalism’ which is an online platform dedicated to contemporary artworks linked with the aesthetics and concepts of graffiti. Stephen Burke Website: www.stephenburkeart.com Instagram: www.instagram.com/stefano.bardsley/

Atelier Maser provides a space for people of various creative disciplines to collaborate, learn and teach. Designed to be transitional and multi-functional, the space operates as an incubator for upcoming Irish artists to hone their craft. The Artist Residency Programme at Atelier Maser is an intrinsic part of the overall vision for the space. It provides exhibiting artists with the time and space to research and develop new ideas, and to create new work in a nurturing environment. At Atelier Maser, we believe in living an ‘integrated lifestyle’ where artistic work, personal wellbeing, and community are aligned to work in harmony. Get in touch Email: hello@ateliermaser.com Follow: @ateliermaser on Instagram, Facebook and Twitter to keep up to date on upcoming events and exhibitions in the space. ateliermaser.com Photography: Johnny Mallin / @johnny.mallin Buff Photography: Fiachra Corcoran Graphic Design: Ross Curran

Printed by our good friends at Plus Print.

SOME SAY, THE CRAFT OF DISTILLING WHISKEY IS AN ART IN ITSELF. AS MASTERS OF OUR OWN CRAFT, AND AS APPRECIATORS OF ART IN ALL ITS FORMS, WE’RE DELIGHTED TO SUPPORT ATELIER MASER ON IT’S MAGNIFICENT CONTRIBUTION TO IRISH CULTURE.