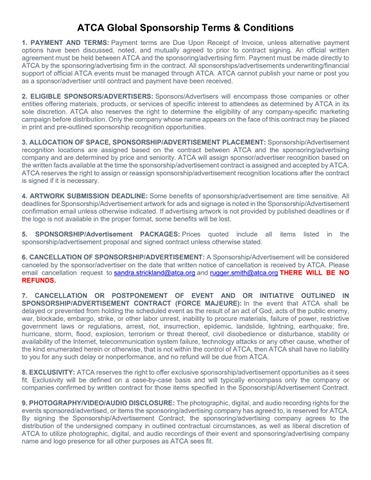 ATCA Global Sponsorship Terms &amp; Conditions 1. PAYMENT AND TERMS: Payment terms are Due Upon Receipt of Invoice, unless alternative payment options have been discussed, noted, and mutually agreed to prior to contract signing. An official written agreement must be held between ATCA and the sponsoring/advertising firm. Payment must be made directly to ATCA by the sponsoring/advertising firm in the contract. All sponsorships/advertisements underwriting/financial support of official ATCA events must be managed through ATCA. ATCA cannot publish your name or post you as a sponsor/advertiser until contract and payment have been received. 2. ELIGIBLE SPONSORS/ADVERTISERS: Sponsors/Advertisers will encompass those companies or other entities offering materials, products, or services of specific interest to attendees as determined by ATCA in its sole discretion. ATCA also reserves the right to determine the eligibility of any company-specific marketing campaign before distribution. Only the company whose name appears on the face of this contract may be placed in print and pre-outlined sponsorship recognition opportunities. 3. ALLOCATION OF SPACE, SPONSORSHIP/ADVERTISEMENT PLACEMENT: Sponsorship/Advertisement recognition locations are assigned based on the contract between ATCA and the sponsoring/advertising company and are determined by price and seniority. ATCA will assign sponsor/advertiser recognition based on the written facts available at the time the sponsorship/advertisement contract is assigned and accepted by ATCA. ATCA reserves the right to assign or reassign sponsorship/advertisement recognition locations after the contract is signed if it is necessary. 4. ARTWORK SUBMISSION DEADLINE: Some benefits of sponsorship/advertisement are time sensitive. All deadlines for Sponsorship/Advertisement artwork for ads and signage is noted in the Sponsorship/Advertisement confirmation email unless otherwise indicated. If advertising artwork is not provided by published deadlines or if the logo is not available in the proper format, some benefits will be lost. 5. SPONSORSHIP/Advertisement PACKAGES: Prices quoted include all sponsorship/advertisement proposal and signed contract unless otherwise stated.

6. CANCELLATION OF SPONSORSHIP/ADVERTISEMENT: A Sponsorship/Advertisement will be considered canceled by the sponsor/advertiser on the date that written notice of cancellation is received by ATCA. Please email cancellation request to sandra.strickland@atca.org and rugger.smith@atca.org THERE WILL BE NO REFUNDS. 7. CANCELLATION OR POSTPONEMENT OF EVENT AND OR INITIATIVE OUTLINED IN SPONSORSHIP/ADVERTISEMENT CONTRACT (FORCE MAJEURE): In the event that ATCA shall be delayed or prevented from holding the scheduled event as the result of an act of God, acts of the public enemy, war, blockade, embargo, strike, or other labor unrest, inability to procure materials, failure of power, restrictive government laws or regulations, arrest, riot, insurrection, epidemic, landslide, lightning, earthquake, fire, hurricane, storm, flood, explosion, terrorism or threat thereof, civil disobedience or disturbance, stability or availability of the Internet, telecommunication system failure, technology attacks or any other cause, whether of the kind enumerated herein or otherwise, that is not within the control of ATCA, then ATCA shall have no liability to you for any such delay or nonperformance, and no refund will be due from ATCA. 8. EXCLUSIVITY: ATCA reserves the right to offer exclusive sponsorship/advertisement opportunities as it sees fit. Exclusivity will be defined on a case-by-case basis and will typically encompass only the company or companies confirmed by written contract for those items specified in the Sponsorship/Advertisement Contract. 9. PHOTOGRAPHY/VIDEO/AUDIO DISCLOSURE: The photographic, digital, and audio recording rights for the events sponsored/advertised, or items the sponsoring/advertising company has agreed to, is reserved for ATCA. By signing the Sponsorship/Advertisement Contract, the sponsoring/advertising company agrees to the distribution of the undersigned company in outlined contractual circumstances, as well as liberal discretion of ATCA to utilize photographic, digital, and audio recordings of their event and sponsoring/advertising company name and logo presence for all other purposes as ATCA sees fit.

10. SPONSOR/ADVERTISER CONDUCT: The sponsor/advertiser shall conduct and operate its sponsorship/advertisement (if a physical element exists) so as not to annoy, endanger, or interfere with the rights of other exhibitors, sponsors/advertisers, and attendees. Any practice resulting in complaints from any other exhibitor, sponsor/advertiser, or any attendee, who in the opinion of ATCA interferes with the rights of others or exposes them to annoyance or danger, may be prohibited by ATCA. 11. LIMITATION ON LIABILITY: The sponsor/advertiser agrees to indemnify, defend, and hold harmless ATCA, the event facility, the owner of such facility, and the city in which this event is being held, and their respective officers, agents, and employees, from and against all bodily and personal injury, loss, claims, or damage to any person or any property arising in any way from the sponsoring company, its employees, agents, licensees, contractors, or customers. ATCA gives no warranties in respect of any aspect of the Conference &amp; Expo, or any materials related thereto or offered at the Conference &amp; Expo and, to the fullest extent possible under the laws governing this Agreement, disclaims all implied warranties, including, but not limited to warranties of fitness for a particular purpose, accuracy, timeliness, and merchantability. The Conference &amp; Expo is provided on an “asis” basis. The purpose, accuracy, timeliness, and merchantability, the views, opinions, and positions expressed by the speakers, attendees, or sponsors/advertisers at the are theirs alone and do not necessarily represent the views, opinions, or positions of ATCA or any employee thereof. The ATCA Global makes no representations as to accuracy, completeness, timeliness, suitability, or validity of any information presented by speakers, attendees, or sponsors at an ATCA Global event. ATCA will not be liable for any errors, omissions, or delays in this information or any losses, injuries, or damages arising from its display or use. ATCA does not endorse, and expressly disclaims all liability relating to, any of the products or services provided by speakers, attendees, or sponsors. 12. RESOLUTION OF DISPUTES: In the event of a dispute or disagreement between the sponsor/advertiser and ATCA or between two or more sponsors/advertisers; all interpretations of the rules governing the sponsorship/advertisement contract, actions, or decisions concerning this dispute or disagreement by ATCA intended to resolve the dispute or disagreement shall be binding on the sponsor/advertiser. Any dispute or controversy of any kind relating to this Contract shall be resolved by binding arbitration in the City of Alexandria, Virginia, administered by the American Arbitration Association in accordance with its applicable rules then in effect. The validity, interpretation and performance of this Agreement shall be controlled by and construed under the laws of the Commonwealth of Virginia. 13. AMENDMENT TO RULES: Any matters not specifically covered by the preceding rules shall be subject solely to the discretion of ATCA. ATCA shall have full power in the matter of interpretation, amendment, and enforcement of all said rules and regulations, and any such amendments when made and brought to the notice of the sponsor/advertiser shall be and become part hereof as though duly incorporated herein and subject to each one of the terms and conditions herein set forth. 14. DEFAULT: If the sponsor/advertiser defaults in any of its obligations under this contract or violates any of its obligations or covenants under this contract, including without limitation any sponsorship/advertisement Rule or Regulation promulgated pursuant to the contract, ATCA may, in addition to any other remedies provided for herein or otherwise available to ATCA at law or in equity, without notice, terminate this agreement and retain all monies received on account as liquidated damages. ATCA may thereupon direct the sponsor or forthwith to remove its employees, agents, and representatives, and all its articles of merchandise and other personal property from the specified sponsored event and location. 15. AGREEMENT TO RULES: The sponsor/advertiser, for itself and its employees, agents, and representatives, agrees to abide by the foregoing rules and by any amendments that may be put into effect by ATCA. 16. ACCEPTANCE Once the sponsor/advertiser signs the Sponsorship/Advertisement Contract and returns it to ATCA, all Terms and Conditions are officially in effect. This agreement shall not be binding until accepted by ATCA. 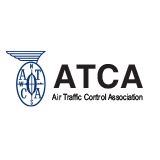