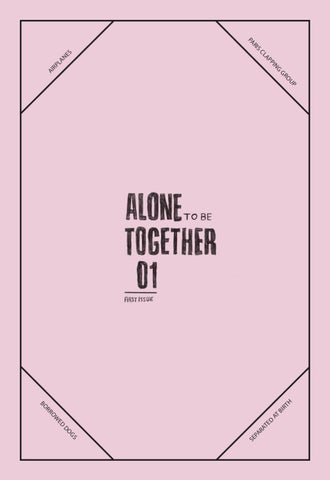 Alone to be Together title issue, March 2011 created and edited by Liza Corsillo

One-Flight Stand The moment I get on a plane--feeling the engine’s vibrations run through my back—I immediately imagine myself pushed up against the plastic bathroom door while one of my fellow flyers is rotating between tartly biting my earlobe, sucking on my lower lip, and running their unfamiliar tongue along the ridge of my broken front tooth, while the stewardess unknowingly saunters down the aisle pouring balmy tomato juice over ice-cubes nestled in the bottoms of disposable cups. Am I a total horn-dog? Or maybe I’m just like everyone else and there is something titillating about aerial travel. Are you like me, in that you can’t get on a plane without sizing up every man (that one with a brief case and a black eye) and woman (her with pouty lips and powdered acne), and considering whom you’d like to fuck? What is it about these massive machines that as soon as the door shuts we start to feel like caged, wild dogs in heat? One could argue it is the proximity. All those bodies in various states of decline compressed as close as politely possible. Perhaps it’s simply the fact of sliding past so many people, slightly touching their knuckles as they grip the end of the seat or brushing your heel against their argyle-clad feet. These bodies filled with the innate guttural desire to stay planted on the firm ground, brushing against each other, wanting to scream in alarm, but instead politely repeating “Excuse me…” as if it was their last humanist mantra.

And of course proximity and fear are part of the reason I feel undeniably turned on in planes, as is the conditional camaraderie you develop with your co-passengers. But I think it’s more than that. There is a sense of loss that comes with flying. The minute we board we are leaving something behind and as the seat-belts are pulled tight, we become aware of this absence, as if by not attending so-and-so’s dinner party like you normally would on Saturday, something inside you has gone missing. Even if that something is just the slightest impression of a place, a memory no deeper than a bottle of whiskey and no wider than a pair of glasses. And part of you (maybe your worst part) wants to fill it up as quickly as possible. Every inch of your traveling body can feel how empty saying “goodbye” has left you. Emptiness is not a thing that we are taught to deal with. Abundance makes us salivate inside and out. We get all goosed up every time we sense a cornucopia coming around the corner, even if it’s only sweet potatoes or pillows. That fullness. That feeling of being stuffed and even over-stuffed—this we know how to deal with. But there is no luxuriating in absence, even modernistic expansive homes are “packed full of white space” a description that makes something out of nothing. When we encounter loss, we immediately strive to fill ourselves up again and hope to do so with the same amount of ease it takes to boil water when you are not staring at it. And so the question becomes: will that guy opening his briefcase in 12-E be the one that fills me up? Because people are another kind of fullness, they are walking around stuffed with possibilities. We can’t help but think that each passenger (strong handshakes, weak handshakes alike) might be the ticket to a new destiny. And if the day is sunny or caffeinated enough for us to imagine life beyond our seasonal depression, we can dream that our one-flight stand might be the turning point where everything starts to go right.

SOMETHING CLASSICAL “j’ai dessiné dans l’air un beau dessin pour toi, comme tu n’etais pas là.” AND ROMANTIC Since I arrived in Gallatin, I have been to a lot of music when I am not recording it. NATURE listening The music is what makes me draw. sea where I am swimming. DRAWING It’sI amtheobsessed with the early records by Brigitte Fontaine. The lyrics, the voice, this lady was born ALMOST SUMMER in 1933; she is still alive. Crazy… great Her early records, often done with her partner STRAW HAT Areski. They are both simple and complex. She sings about love, death, images, and visions. barn I am very scared of the animals in the night. TALL GRASS InI wastheborn in Paris, I am a girl from the city and I am not used to all of these night sounds. I record the frogs, the birds, the owls, and other things I cannot name. It takes me some days to understand what I want to show here. I am a slow and a rapid person, a turtle and a rabbit. I am interested in the experience. I am obsessed also by the word BARN. There is a band I love called BARN OWL. There is a cool place in Brooklyn for music called THE SILENT BARN. I record and draw everyday. I don’t have an agenda or a schedule. Things appear and they tell. My project could have been called

BRIGITTE BARN AND THE WEIRD NOISES IN THE NIGHT or I LISTENED TO THE OWLS AND TO BRIGITTE FONTAINE AND I WAS AFRAID PART OF THE TIME.

Lauren Von Dogs Now, every time I walk past a dog, no matter how ugly or smelly it is, I find myself saying that I want it, or describing to whomever is nearby how cute the dog is, in that ridiculous tone you reserve for speaking to a babies. I collect photographs of other peopleâ&#x20AC;&#x2122;s dogs that I see looking out onto the street from their homes. Sometimes I ask dog walkers in the park if I can borrow their dog and pretend it is mine. One of the dog walkers told me that she was in fact borrowing her dog. She told me of a place in the park for abandoned dogs. I paid 20 â&#x201A;Ź for a year and now I can walk any of the dogs there during lunch time. Except on Sundays. This picture is of two dogs at a shop where they sell french fries. I have never seen the shop open. The first five or so times I went past the shop there was only one dog at a time. I thought it was the same dog. Then this last time, I saw that there were two dogs; that look the same.

There are the divas of makeup tutorial videos, those who have 60,000 views in the first few days, getting hundreds of thousands of views over weeks and months. Sure, some are professionals, the makeup counter girls from the local Saks; those groomed by their mothers to be always on. But others seem so normal, so unguarded, in their messy bedrooms, earnestly telling the viewer how they think Bad Gal is better than Great Lash. When I watch them, I wonder, how could these young women ever be lonely? They have hundreds of thousands of viewers watching as they apply mascara. (Past junior high, has anyone ever watched you apply mascara? Did you like it? Or did you shoo them away?) This isn’t to ask, like a concerned adult, what the consequences are of being exposed in such a private activity, or in performing intimate tasks for the whole world to see, or in general, having an online presence. It is to ask, what does loneliness look like when in your day to day grooming, you know that you have legions of fans? As a teen, I wore lots of black eyeliner, and potentially too much to get away with wearing, when leaving the house. So my routine was putting on eyeliner in school hallways, outside, on the bus, with a casualness I can’t fathom now. More so, I valued the opinions of my friends above all else, as they did similar things, passing a cigarette back and forth between us. Their folklore is with me to this day, Nina’s assertions about how you should put on mascara before taking a shower, Emily’s telling me I shouldn’t wear dark lipstick. I’ve seen Nina once in the past ten years, Emily not at all. Yet thinking about them, in my bathroom, I do feel lonely. Maybe loneliness is that ability to hear other people, long for them, and to be distraught about it. The next time I hear Blair’s voice in my head as I put on my mascara, I will shoo her away like I do my husband when he’s in my immediate proximity, and then revel in my aloneness.

Over Here! I once got chased by a cow. We used to visit my dad’s farm every weekend when I was a kid. Some parts of it were not for kids. I once found a stack of dirty magazines in one of those parts. I liked to sneak away whenever I could to see what else I could find. Walking back alone one afternoon, I noticed a cow wandering around. That was unusual. I got nervous and even more nervous once she noticed me. We stared at each other. I started walking faster. So did she. Then I ran. So did she. I wondered about yelling “help” but this farm was in Brazil and I couldn’t remember the word. I didn’t want to yell in English so I just kept on running. I think I was only running for seconds but it seemed like a lot longer because I was doing a lot of thinking.

I wondered what would happen if I managed to make it to the house. I could run in and slam the door behind me and shut that cow out. But I couldn’t remember the way back. I wondered why no one was around. I wondered if cows ate people. I couldn’t remember that either. And I still couldn’t remember the word for help. The cow got closer and closer. I could feel my heart beating in my head. What could I say instead? Maybe, “Come! Come!” Maybe, “Somebody, please!” Maybe, “Over here!” They all seemed weird. I looked back again and a man was running for the cow. He got her. I was embarrassed so I kept running. He tied her up and came after me. “Why didn’t you yell for someone!” hollered the man. The only word I could think of now was “Socorro”. S-O-C-O-R-R-O. That’s Portuguese for “help”.

One-Minute Scenarios* Group (a) and Group (b) face to face. They all have hands raised and are ready to applaud at each otherâ&#x20AC;&#x2122;s faces. A video camera is lowered from above. *These scenarios were conceived for the Paris Clapping Group, funds were received by donation (essentially passing the hat) so that anyone could view the performance free of charge.

One-Minute Scenarios* A group of people are running in a park. The camera backs up. They suddenly fall asleep. *These scenarios were conceived for various representations across Europe. The key was their reliance on travel to achieve fame and financial success.

Thank you Angela, Susan, and George. 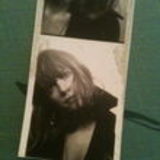 Alone to be Together Issue #1

As extreme as a sensory deprivation chamber, or as subtle as closing your eyes. Alone to be Together aims to explore ideas honestly, to disc...

Alone to be Together Issue #1

As extreme as a sensory deprivation chamber, or as subtle as closing your eyes. Alone to be Together aims to explore ideas honestly, to disc...