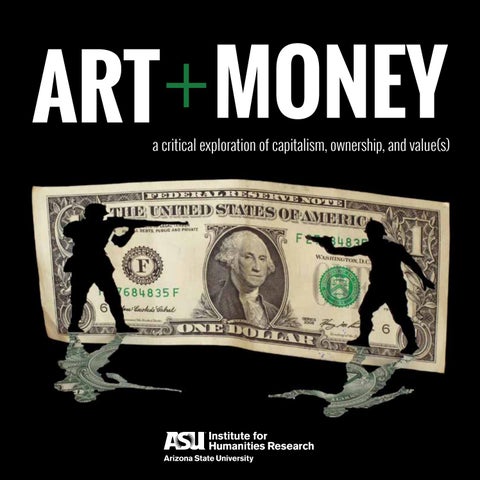 a critical exploration of capitalism, ownership, and value(s)

On the cover: Davis Birks, War Monument, 2009 Reception photo and Things we’d rip off installation photos © Megan Baker; all other photos courtesy of the artist

Art and Money © 2017 Angelica Fox for the Institute for Humanities Research, Arizona State University Catalog designed by Susan Poole Anderson All rights reserved. No element of this publication may be reproduced or transmitted in any form or by any means, including recording, photocopy, or any other information storage and retrieval system, without prior permission in writing from IHR and the artists featured in this publication.

About the curator Angelica Fox is the 2016-17 contemporary art curator of the IHR and the 2015-17 Windgate Curatorial Assistant at the ASU Art Museum. Curator’s Acknowledgements: “First, thank you to the Institute for Humanities Research for providing the opportunity for me to curate this exhibition. A special thanks to Susan Anderson, Anne Schutte, Jennifer Quincey, and the 2016-17 IHR Fellows. Thank you to ASU HIDA, the Harry Wood Gallery, and specifically Grant Vetter, Dean Steven Tepper, and the rest of the encouraging faculty. Thank you to all of the ASU Art Museum staff, especially Heather Sealy Lineberry and Julio Morales. Thank you to Jacob Gulinson, my friends, and family for all the love and support. Finally thank you to all of the incredible artists who have participated in this exhibition, this project could have never happened without you!”

The 2017 IHR Art Exhibition Art + Money takes as its starting point the tangled intersection of the art market and the economy. In this exhibition, Arizona artists of all media provide critical explorations of capitalism, ownership, and values. Capitalism, an economic system wherein forprofit investors control industry and trade, could result in a clear reflection of what is valued in a society — literally and figuratively. Artist Davis Birks’ sculpture War Monument (2009) fashions a US dollar note as a response to the $4.8 trillion dollars the US federal government spent or obligated on the wars in Afghanistan and Iraq.1 This enormous amount, of course, does not take into account the staggering human cost of warfare. Birks’ sculpture offers a protest through a single dollar bill by questioning what is truly valued in American society and who, ultimately, pays the price. Like many works in this exhibition, Gregory Sale’s social art piece, Things we’d rip off (2008), explores the power of money in American society and the art market. Sale surveyed ASU School of Art faculty members in order to determine what they believe is

intrinsically valuable about themselves as teachers and how one might ascribe value to contemporary art school training. He did so by offering a $2 bill to all who teach within the art school (from tenured faculty to graduate students) and asking them to share what they believe is important to instill in their students. Those who responded were given the choice to use the $2 in their response (see image opposite), or simply to keep it as payment for their contribution. According to Sale, the power of capitalist economies dominates the representation of value. Where do values come from, he asks, and how are they measured? The financial crisis in 2007-08 severely affected the global economy and revealed the fallibility of the modern banking system. Legacy (2012) by John Risseuw literally melds historical artifacts together to memorialize the risks behind the collapse. Risseuw printed his work on handmade paper created from home foreclosure documents, scraps of clothing from the homeless, biographies of former President Ronald Reagan, shredded US currency, and the Glass-Stegall Banking Act. The destroyed material objects also

illuminate the destruction of the intangible – e.g. the value of our dollar, our collective equity, and dreams of upward mobility..2 In Arizona, a state where border tensions permeate our daily lives, artist Davis Birks explores the close but complicated economic relationship between the US and Mexico. His work Empire 2 (2009) illustrates a prevalent imperialistic attitude in U.S. foreign policy towards Mexico stemming from the nineteenth century expansionist doctrine of “Manifest Destiny.” This school of thought held that US expansion throughout North America was both morally justified and assured. Birks’ installation initiates a dialogue concerning the US as a superpower, the influence of its monetary system within the context of international fiat currencies, and the idea of fiscal responsibility in an era of deficit spending. Finally, Plastic Song from the series Songbird (2013) by Victoria Mariel Paz explores the complex relationship between the instability of the economy and the dependency of artists on the art market.3 In Paz’s performance, four women artists stand under a bridge between the headquarters of two international banks in Canary Wharf, London, pouring salt, an early form of currency, into a river. The performance is translated into a photograph for the exhibition and is accompanied by text describing the interdependence of financial markets, society, and artists. Performed in the absence of an audience, Plastic Song as a printed artwork in effect renders the performance obsolete, so it can be objectified and given financial value. Art + Money aims to open a dialogue about current US socio-economic conditions and their effects on contemporary artists and the public. Each of the works in

Institute for Humanties Research 2016-17 Fellows At Arizona State University, the Institute for Humanities Research Fellows Program seeks to encourage transdisciplinary dialogue, collaboration, and intellectual work between faculty, campuses, and other institutions. Fellows in the program engage in weekly seminars, share and discuss readings, participate in public events, and present the culmination of their work in a symposium at the end of the year. The 2016-17 Fellows all addressed the theme of “money” from a multitude of approaches, times, and places in order to engage questions about something that we use every day. What is money? How does it work? Who does or does not have it? What does money do? How does this change through time and place? What does money say about the human experience? ----------------------------------------------------------------------------------------------------------------------------------------------Immaterial Growth: Energy and Economics in the American Century Chris Jones, Assistant Professor, School of Historical, Philosophical, and Religious Studies Contemporary sustainability challenges are exacerbated by a widespread belief among academics, policymakers, and the broader public that economic growth can continue indefinitely without accounting for environmental stocks and sinks. Chris Jones’ historical investigation argues this divide between ecology and economics is not inevitable. Instead, Jones demonstrates that economists used to factor the natural world into their analyses, and only ceased doing so over the last century and a half. Jones’ research utilizes the methods of the humanities to illuminate assumptions and contingent developments in the history of economics that reveal alternative ways current environmental debates could be framed. Economies of Scale: Capitalism and Containment in 21st-Century North American Poetry Ann Keniston, Professor and Director of Undergraduate Studies, Department of English, University of Nevada, Reno The first book-length study of its topic, Economies of Scale: Capitalism and Containment in Contemporary North American Poetry, argues that economic language and imagery in diverse 21st century poems enables poets to comment on the relation between the arts and contemporary finance-based capitalism. These poems also reveal something surprising: they repeatedly disrupt the traditional poetic figure of synecdoche, in which the part stands for the whole, in ways that destabilize notions of value, containment, and scale. Ann Keniston’s project considers the implications of this destabilization both within individual poems and in relation to the much-lamented “death of poetry.”

Yerba Mate: An Indigenous Stimulant, Money, and Empire Building Julia Sarreal, Associate Professor, School of Humanities, Arts, and Cultural Studies, New College of Interdisciplinary Arts and Sciences Julia Sarreal’s project broadens our understanding of what can and cannot be considered money by exploring the use of a commodity (in this case, the South American beverage, yerba mate) as a form of money in a region lacking coinage. And in this role, yerba mate took on further importance as a tool for empire building. Such a development entailed significant cultural change. Europeans first found the indigenous (Guaraní) caffeinated beverage repulsive but consumption spread so widely that within decades many claimed it a basic necessity. New Directions for Economic Approaches to English Renaissance Drama Bradley Ryner, Associate Professor, Department of English Early landmark studies of the economic context of the English Renaissance stage presented its drama as reflections of large-scale economic changes, such as price inflation, urbanization, the supersession of customary forms of land tenure by leaseholds, and the rise of merchant capital. Recent scholarship has favored more focused analyses of material, legal, and social practices specific to different domains of economic activity. Following the “new economic criticism,” which understands economics itself as a type of discourse rather than as an extradiscursive reality grounding representation, scholars have traced formal similarities between economic writing and drama, showing that, rather than the latter passively reflecting the former, both actively engaged with emergent economic ideas. Bradley Ryner asks what new models of the relationship between English Renaissance drama and economic history are suggested by recent scholarship, and how might such models guide the next generation of scholarly work? Bank Wars: The Contentious World of Money and Banking in the Early United States Jonathan Barth, Assistant Professor, School of Historical, Philosophical, and Religious Studies Money and banking was a tumultuous subject in the early United States. In the decades after independence, the country underwent a monetary revolution: from only four banks in 1790, the United States boasted over three hundred banks by the late 1810s, each issuing their own paper currency. This extraordinary development transformed far more than the economy: it revolutionized the political landscape, giving rise to the Second American Party System of Democrats and Whigs, contributing to a populist uprising in the 1830s, and concluding with the “democratization” of antebellum banking by 1840. The history of early American money and banking sheds light upon far more than simply economic and financial development. It illuminates the roots of America’s unique brand of political and cultural populism: both the good and the ugly.