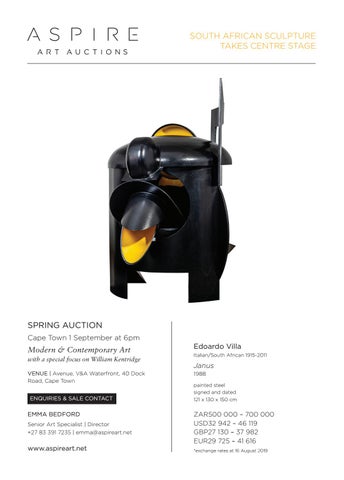 SCULPTURE AT AUCTION Sculpture makes up the second largest segment in the global art market, accounting for an astonishing USD626.3 million in auction sales in the second quarter of this year alone (MutualArt). Over the past two decades, sculpture – as a progressive collecting category – has gained widespread popularity, with current prices up 36.5% compared to those of 2013 (Citadel). Since Aspire’s launch in late 2016, the company has handled approximately 145 sculptural works, generating a total value of R33.5 million for this category to date. In 2018, Aspire sold Fire Walker by William Kentridge and Gerhard Marx for over R3.9 million – the current South African auction record for a sculpture by these artists. Other local records include Willem Boshoff (Clast Mar, sold for R682 080 in 2018) and David Brown (Engine Driver, sold for R273 120 in 2018). Aspire has also successfully sold works by Wim Botha, Ezrom Legae, Lucas Sithole and Anton van Wouw. World auction records for artists set by Aspire include: Angus Taylor (Sit en Staan, sold for over R2.9 million in 2018), Sydney Kumalo (Mythological Rider, sold for over R1.9 million in 2017), Edoardo Villa (Vertical Composition, sold for R1.8 million in 2017) and Deborah Bell (Sentinel VI, sold for R909 440 in 2017).

Notably, five of the top six prices reached worldwide for works by Edoardo Villa were achieved by Aspire, making the company the most successful auctioneer for the artist’s work globally. Additionally, the majority of Aspire’s top sculptural performers set significant new records, demonstrating its position as the leader in the South African sculpture market. Demand for sculpture continues to grow, not only due to its investment potential, but also because of the current mainstream interest in the medium. Reputable institutions, fairs and exhibitions are increasingly focussing attention on developing their focus on sculpture.

Aspire proudly presents another unique offering of South African modern and contemporary sculpture in the SPRING 19 Auction on 1 September in Cape Town. The collection offers intriguing insights into the range of approaches, materials and concepts brought to bear on the medium by South African sculptors. With the auction’s special focus on William Kentridge, the sculpture collection is led by a full Set of 5 Polychrome Heads. First shown in London in 2015, this set is cast in bronze, but painted trompe l’oeil style to resemble rough wooden stands on which are bricolaged, torn ledger pages, scribbled with obscure English names or Chinese characters. The heads hint at the Weimaresque, certainly Modernist, intellectual zeitgeist, a period in history in which post-colonial anxieties have provided Kentridge with much inspiration. Sculptures by Kentridge are seldom seen at auction, yet they lead his market globally, particularly, as with this example, when they are a full set of works in a series. Kentridge’s current world record at auction is for Procession (1999/2000), a set of 25 sculptures that sold for over USD1.5 million in New York in 2013.

Three monumental works by three leading sculptors – Edoardo Villa, Willie Bester and Angus Taylor – indicate the various approaches, breadth and depth of the medium over different time periods. Villa produced Janus, a sophisticated abstract sculpture in painted steel, in the late 1980s. The work was gifted to the artist’s good friend, the visionary female architect Carmel Back and was a prominent feature in her Parktown home for many years.

steel, enamel, oil on canvas and found objects 245 x 145 x 170 cm R500 000 – 700 000 Poverty Driven is an impressive large-scale sculptural assemblage of various components and mixed media constructed by Bester in 2002. The work was first exhibited in Cape Town in 2005 and then formed part of Bester’s solo exhibitions at the Montagu Museum in 2007 and the Iziko South African National Gallery in 2008. It was recently on view at Zeitz MOCAA in Cape Town as part of the exhibition Still Here Tomorrow to High Five You Yesterday…, curated by Azu Ngwagbogu. This “machine of history” suggests a number of socio-political narratives. Professor Sandra Klopper describes the sculpture as a “radically modified bulldozer” signifying the “important metaphors of social and political change” and “alluding to the ideas of both demolition and reconstruction”. Poverty Driven is a significant piece emblematic of the work Bester made in the years immediately succeeding his career boom in the late 1980s. This important consignment follows Aspire’s record breaking sale of Bester’s Bench for Mr Semikaze for just over R250 000 in November 2017.

Composite Portrait Belfast granite, steel, concrete and ground on a concrete base head: 124 x 55 x 65 cm; base: 73 x 44 x 44 cm R150 000 – 250 000 Angus Taylor’s powerful and inventive work has earned him recognition as one of South Africa’s most successful contemporary sculptors. Known for his use of alternative mediums in monumental scale, his impressive figurative stone head, titled Composite Portrait, is comprised of Belfast granite and compacted soil or ‘rammed earth’ as the artist prefers to describe it. The result is a work uniquely South African in its materiality.

bronze signed, numbered 11/15 and stamped with the Bronze Age Foundry mark 54 x 118 x 28 cm R400 000 – 600 000 A big cat, Stalking Cheetah II (2001), by internationallyrenowned sculptor Dylan Lewis completes the collection. Lewis is the only South African artist to have had solo auctions at Christie’s in London. At the 2011 auction, 68 of his bronzes sold collectively for more than £1.2 million. Lewis has his own extensive sculpture garden and foundry in Stellenbosch, and another dedicated auction of his work is scheduled for later in September in London. 4

SOUTH AFRICAN SCULPTURE TAKES CENTRE STAGE AT OUR SPRING 19 AUCTION Read more about sculpture at auction and our Spring 19 highlights...

SOUTH AFRICAN SCULPTURE TAKES CENTRE STAGE AT OUR SPRING 19 AUCTION Read more about sculpture at auction and our Spring 19 highlights...