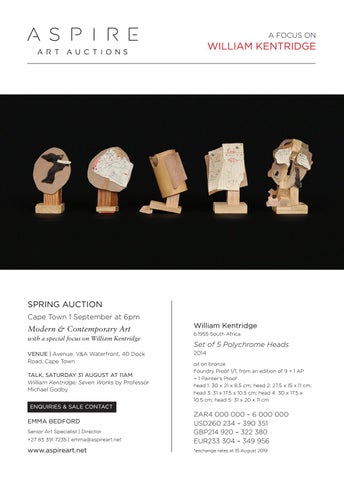 NOTES Published by William Kentridge in collaboration with The Artists’ Press, Johannesburg, 2000. Cloth casting made by Peter Castens. Printed by Mark Atwood, Paul Emmanuel and Joseph Legate, The Artists’ Press. 2

The 1980s were a significant time in William Kentridge’s career. At the beginning of the decade, he was uncertain whether his future lay in visual art or in the theatre; while by the end he had won both the Standard Bank Young Artist Award and the Cape Town Triennial and, with the film Johannesburg 2nd Greatest City after Paris (1989), was about to launch his international career. Thus the dispute over the date of this remarkable drawing – with experts reading the somewhat rubbed last digit in the bottom left hand corner as either a ‘2’ or an ‘8’ – was significant. As it stands, the date certainly looks like ‘1982’. But fortunately the artist himself has settled the matter, pronouncing that the drawing was certainly made in 1988. The later date obviously accommodates Kentridge’s absence at theatre school in Paris in 1981 and much of 1982, and his well-documented neglect of drawing until 1984. It also places both the style and the subject-matter of this drawing close to the several landscapes he made between the prize-winning Embarkation (1987) and the desolate peri-urban backgrounds to Johannesburg 2nd Greatest City after Paris. By around 1988, Kentridge had achieved a lightness and spaciousness in his rendering of landscape; and he had established his vocabulary of mine dumps, high-mast lighting, culverts, tyre tracks, etc., that feature prominently in this drawing and, in one way or another, many other works of this time. Moreover, in November 1988, Kentridge published his essay Landscape in a State of Siege that provides a theoretical platform for this and similar landscape drawings. The essay opens with the statement “For about a year I have been drawing landscapes” and goes on to expound his condemnation of traditional landscape painting in South Africa and explain his strategies for rendering his geographical environment meaningful. Thus, to escape what he called “the plague of the picturesque”, he would set his odometer at random distances, drive, and draw whatever he found there, generally, as he wrote, “a catalogue of civil engineering details”. For the artist, “the variety of the ephemera of human intervention on the landscape is far greater than anything the land itself has to offer” – and, one may add, more meaningful. Kentridge’s point in reproducing this “catalogue”, or, more often, constructing it from known parts, in the present drawing and all that he made around this time, is to insist on the historical dimension of landscape, a dimension that obviously privileges the economic and political aspects of the South African experience over any supposed beauty in nature. For Kentridge, evidently, the Witwatersrand of his landscape drawings is more truly real, more truly African, than any Tarzan movie or painting by Pierneef. Michael Godby Kentridge, W. (1988). Landscape in a State of Siege in Stet, volume 5, no.3, pp.15-18.

Sculptural work by the ever-prolific William Kentridge is still relatively rare. Though a fairly regular feature of his oeuvre, it is often in conjunction with other bodies of work or a collaborative venture, such as the iconic Fire Walker public sculpture in downtown Johannesburg, created with fellow artist Gerhard Marx. The three dimensional medium also makes sense for the artist when seen as part of a multimedia, theatrical or music production, and often Kentridge’s planning for these live shows involves maquettes or modelling that can give rise to sculptural ideas. One of these, we might speculate, is the fascinating Set of 5 Polychrome Heads. First shown in a formal gallery setting, and as a full edition of five sculptures, at the Marian Goodman Gallery in London in 2015, the idea for the works, according to a contemporary review in Black Qube magazine, comes from Kentridge’s staging of Alban Berg’s opera Lulu at the Metropolitan Opera in New York in the same year: “(the) painted bronze heads…originated through research for Kentridge’s production of Alban Berg’s opera ‘Lulu’. He placed cardboard cylinders over the actors’ heads, painting them with rudimentary features and creating simple masks that served as devices halfway between them and the drawings projected around them. What began as a formal investigation into how little is needed to recognise a head became adroitly bricolaged sets of five ‘Polychrome Heads’.1 Far from being straightforward versions of these theatrical masks in the production, Kentridge brings his characteristic intellectual weight to realising the edition of five sculptures. They are cast in bronze, but painted, trompe l’oeil style, to resemble rough wooden stands on which are bricolaged, torn ledger pages, scribbled with obscure English names or Chinese characters. The heads hint at the Weimaresque, certainly Modernist, intellectual zeitgeist, a period in history in which post-colonial anxieties have provided Kentridge with much inspiration. James Sey William Kentridge at Marian Goodman Gallery London, in Black Qube Magazine for Art and Design. 30 September 2015. http://www.blackqube.de/ william-kentridge-at-marian-goodman-gallery/ Accessed 6th August 2019. 1

View our Spring 19 William Kentridge highlights and past auction successes

View our Spring 19 William Kentridge highlights and past auction successes