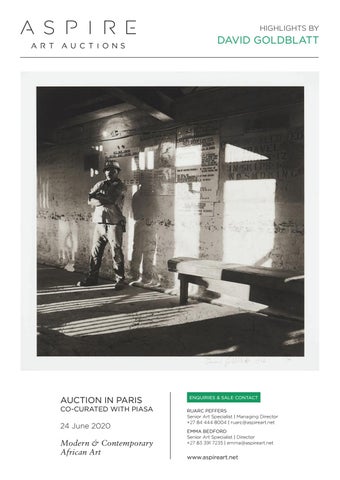 Aspire has nurtured a passion for the medium of photography and an unwavering belief that the work of South African photographers is amongst the most rigorous and compelling lens-based art produced today. Our continuing emphasis on the excellent quality and incredible value inherent in the South African photographic tradition is evident in our consistently strong results. We hold several local and international auction records for important photographers including selling Pieter Hugo’s Mallam Mantari Lamal with Mainasara, Abuja, Nigeria, 2005 for ZAR512 100 (€26 300) in 2019, the highest price for the photographer at auction in South Africa. Mary Sibande’s A Terrible Beauty is Born sold for ZAR341 400 (€17 400) and Mohau Modisakeng’s Ditaola XV for ZAR261 740 (€14 400)—both world records at auction. We have regularly sourced rare examples of highly collectable photography including images uniquely hand-printed by photographers. Goldblatt’s hand-printed gelatin silver prints District Six and Circumcision Initiate near Coffee Bay, Transkei 1975 were sold by Aspire for ZAR238 980 (€12 200) and ZAR170 700 (€8 700) respectively in November and September 2019. The collecting audience for contemporary photographs is global and growing exponentially, underscoring the broad appeal of the medium. Photography is esteemed by museum curators and collectors alike. With increasing interest in collecting from Africa, nascent markets like those in South Africa present good opportunities for growth. David Goldblatt is the most lauded photographer South Africa has produced to date. Born in 1930 in Randfontein, a gold mining town outside Johannesburg, Goldblatt photographed his country and its communities from 1948 until just months prior to his death in June, 2018. His principal work focused on critical explorations of South African society, and has been internationally exhibited and published in book form. He was the recipient of a number of awards and three honorary doctorates—from the universities of Cape Town, Witwatersrand and the San Francisco Art Institute. Goldblatt has long been regarded as the conscience of his country, and termed himself “an unlicensed, self-appointed observer and critic of South African society, which I ... explore with the camera”. He founded the Market Photo Workshop in 1989, after building a brilliant and acclaimed career from humble beginnings. Goldblatt numbered among his major awards the Camera Austria Award 1995, the Hasselblad Foundation International Award in Photography 2006, the Henri Cartier-Bresson Award 2009, Lucie Lifetime Achievement Award 2010, and the Infinity Lifetime Achievement Award from the ICP, New York, in 2013. Goldblatt’s works are held, among others, in the collections of MOMA, New York; Bibliotheque Nationale, Paris; The Victoria and Albert 2

Museum, London; Centre Pompidou, Paris; The National Gallery of Victoria, Melbourne, Australia; Fotomuseum Winterthur, Switzerland; Huis Marseilles, Amsterdam, the Netherlands; MCA Sydney and Art Gallery of Western Australia in Perth; Ludwig Museum, Vienna, Austria; SFMOMA and the Getty Museum in California; the Iziko SA National Gallery in Cape Town and the Johannesburg Art Gallery. Some 20 retrospectives of Goldblatt’s works around the world culminated in two major such exhibitions; in the first half of 2018 at the Centre Pompidou, Paris and shortly after his death at the Museum of Contemporary Art Australia, Sydney. Many books and catalogues have been published on Goldblatt and his photographs between 1973 and 2018, the most noted now being republished by Steidl of Germany. They number among them his highly acclaimed books with Nobel prize-winning writer Nadine Gordimer, On the Mines (Struik, Cape Town, 1973) and a revised new edition by Steidl in 2013; Some Afrikaners Photographed (Murray Crawford, Johannesburg, 1975); and Lifetimes: Under Apartheid (Knopf, New York, 1986). His book Particulars, (Goodman Gallery Editions, Johannesburg 2003) was awarded the prestigious Arles Book Prize for 2004, in France. Goldblatt’s vision offers poignant insights into the human condition, and yet his work remains uniquely South African. As he has said in answer to a question from Okwui Enwezor in David Goldblatt: Fifty-One Years “You asked about how and why my work took the direction it did. This was partly because I needed to explore my own world, this country, with its own particularities. Even in something as apparently simple as the quality of light. It’s vital to my sense of this place. … We have a lot of it in South Africa, and it’s often sharp and harsh. So instead of fighting our light, I began to enjoy it and to work with it. I photographed from within rather than as if I were visiting from somewhere else.”1 A miner waits on the bank to go underground, City Deep Gold Mine, 1966 (2_3041) is a rare platinum print that is seldom seen on the open market. Daniel Cloete, Goat Farmer, Pootjiespram, Richtersveld, Northern Cape. 23 December 2003 and Diepsloot, 15 August 2009 (A-0197) are large pigment prints. The latter is the only photograph printed from this edition, 5 years after it was shot. By then Goldblatt was really happy with the computer controlled printing and lightfast pigment dyes as medium. After his illness no further images were printed and no posthumous printing allowed, making this a unique print.2 All three photographs are in excellent condition. Okwui Enwezor ‘Matter and Consciousness: An Insistent Gaze from a not Disinterested Photographer’ in Goldblatt, D. with Diserens, C and Enwezor, O. (2001). David Goldblatt: Fifty-one Years. Museu d’Art Contemporani de Barcelona (MACBA), p.22. 2 Information provided by Neil Dundas per email to Emma Bedford, 12 June, 2020. 1

EXHIBITED Norval Foundation, Cape Town, On the Mines, 13 February to 11 August 2019, another example from the edition exhibited. 4

On the Mines is an extraordinary body of work, shot often under challenging circumstances, in which the photographer provides insights into the lives and difficult conditions of miners whose labour has sustained the South African economy and created extraordinary wealth. Here, with his astute eye, Goldblatt captures a miner awaiting the transport that will take him underground for a dayâ&#x20AC;&#x2122;s work. With remarkable economy, both strength and determination are suggested in his rock-solid stance. And yet, a look of caution and a hint of reticence are revealed by this photographer known for his empathy and ability to see beyond appearances. 5

Diepsloot, Johannesburg, 15 August, 2009 (A_0197) is a unique work, both in its vision and its production. There are two different images with this name but taken from different overhead airborne vantage points. Both were only printed around five years later when David was really happy with the computer controlled printing and lightfast pigment dyes as medium. This one, archive number A_0197 is, in fact, the only extant edition of this work. Just edition 1/10 was printed and approved by David and until the first Diepsloot image from higher overhead was sold out he did not release this one. After he fell ill, the colour prints were not returned to, apart from one batch of landscapes which he flew to the Cape to approve. And no posthumous printing is allowed as stipulated by Goldblatt in his will and his Trust. So this really is a unique print. Diepsloot (A_0213) is fully sold out including APs. The photograph was taken from a helicopter flying low over sprawling black townships, low cost housing projects and informal settlements on the outskirts of Johannesburg. These places still are a hangover of apartheid-era segregation. Goldblatt (at almost 80 years old), while harnessed at the open door of the aircraft, took a number of images, recording congestion and poor conditions in the hard lives of the denizens of these places. David Goldblatt used these aerial photographs along with a number of other digital prints in colour, as part of a series he titled Structures of Dominion and Democracy. In an introductory text for this group of works he wrote: “Shacks bloomed in Diepsloot, a township of both informal and formal housing north of Johannesburg, which was established as a ‘temporary measure’ for people removed from other townships. It has just grown ever since and it is home—whether temporary or otherwise—to about 150,000 people at the time of writing, Johannesburg, August 2009. “From time to time over the years, I photographed South African structures which I found eloquent of the dominion which Whites had come to exert over all of South Africa and its peoples. That time of dominion or domination began in about 1660 when Jan van Riebeeck ordered a cordon of blockhouses and barriers that would exclude the indigenous population from access to the first European settlement, with the lands, water and grazing which previously they had freely used. “The time of domination ended on February 2, 1990, when, on behalf of the government and the Whites of South Africa, President FW de Klerk effectively abdicated from power and then joined with Nelson Mandela and others to create a new way of being for South Africans. More recently, I have photographed some structures eloquent of our still nascent democracy, and others eloquent of strains of thought and governance that are insidiously and even blatantly undermining of democracy. “In the belief that in what we build we express much about what we value, I look at South African structures as expressions and declarations of values. They speak of our ethos.” Text supplied by Goodman Gallery. 7

Between 1999 and 2011 David Goldblatt began working in colour, a medium he had not used previously other than in commissioned professional photography. From time to time, over a period of nine years, he travelled the country in search of intersectionsâ&#x20AC;&#x201D; intersections of ideas, values, histories, conflicts, congruencies, fears, joys and aspirationsâ&#x20AC;&#x201D;and the land in which and often because of which these happened. Here, in the dry, sparse Richtersveld desert wilderness, contrasts between the unyielding, infinite landscape and the brevity of human life are magnified by the photographerâ&#x20AC;&#x2122;s astute eye and incisive lens. 9

1. Change in total sales, number of lots offered and sold David Golblatt’s international status as an important photographer was confirmed in 1998 when he became the first South African to present a solo exhibition of his work at MOMA in New York. The performance of Goldblatt’s photographs at auction runs parallel with the global development and rise in value of photography as a collecting category over the past decade. His is a niche market, and shows an intermittent but consistently upward trajectory since 2011 in terms of works offered and sold at auction, except for 2018, the year Goldblatt passed away, which shows a slight decline in supply, yet the sell-through rate of works were stronger than in previous years at 70%. 2017 and 2019 are the best performing years for Golblatt showing a higher number of works coming to auction and more sold at higher prices. 2019 was a standout year with a total of $196 694 realised in global sales turnover at auction.

2. Sold lot performance against estimate A crucial factor for collecting Golblatt’s work is to understand his editioning and printing processes. Edition sizes and numbers may vary and are aspects that will affect auction estimates and prices realised. In addition, hand printed editions, signed and unique prints will also generally be more valuable, as will editions with good literature and exhibition provenance. Considering these components of value, Golblatt’s works rarely sell for below their auction estimates, while the largest majority of works sell within their estimate and 20%-30% selling above. Demand for rare and good quality prints remain high, showing a sell-through rate 70% of works coming to auction with an increasing upward trajectory in prices since 2016 and reaching an all-time high in 2019. Data sourced from MutualArt: www.mutualart.com

David Goldblatt is the most lauded photographer South Africa has produced to date. Read more about the three exceptional works we have comin...

David Goldblatt is the most lauded photographer South Africa has produced to date. Read more about the three exceptional works we have comin...