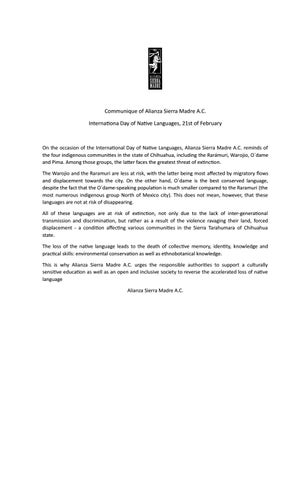 On the occasion of the International Day of Native Languages, Alianza Sierra Madre A.C. reminds of the four indigenous communities in the state of Chihuahua, including the Rarámuri, Warojio, O´dame and Pima. Among those groups, the latter faces the greatest threat of extinction. The Warojio and the Raramuri are less at risk, with the latter being most affected by migratory flows and displacement towards the city. On the other hand, O´dame is the best conserved language, despite the fact that the O´dame-speaking population is much smaller compared to the Raramuri (the most numerous indigenous group North of Mexico city). This does not mean, however, that these languages are not at risk of disappearing. All of these languages are at risk of extinction, not only due to the lack of inter-generational transmission and discrimination, but rather as a result of the violence ravaging their land, forced displacement - a condition affecting various communities in the Sierra Tarahumara of Chihuahua state. The loss of the native language leads to the death of collective memory, identity, knowledge and practical skills: environmental conservation as well as ethnobotanical knowledge. This is why Alianza Sierra Madre A.C. urges the responsible authorities to support a culturally sensitive education as well as an open and inclusive society to reverse the accelerated loss of native language Alianza Sierra Madre A.C. 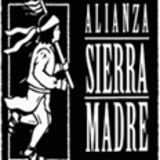