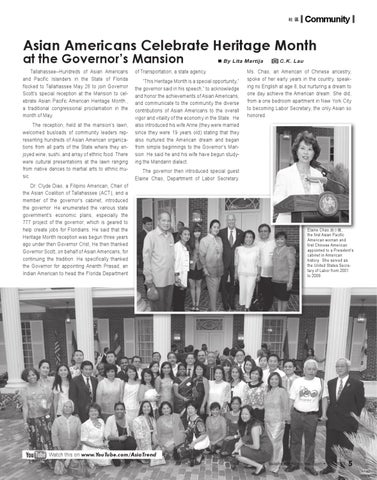 Asian Americans Celebrate Heritage Month at the Governor’s Mansion Tallahassee--Hundreds of Asian Americans and Pacific Islanders in the State of Florida flocked to Tallahassee May 26 to join Governor Scott’s special reception at the Mansion to celebrate Asian Pacific American Heritage Month., a traditional congressional proclamation in the month of May. The reception, held at the mansion’s lawn, welcomed busloads of community leaders representing hundreds of Asian American organizations from all parts of the State where they enjoyed wine, sushi, and array of ethnic food. There were cultural presentations at the lawn ranging from native dances to martial arts to ethnic music. Dr. Clyde Diao, a Filipino American, Chair of the Asian Coalition of Tallahassee (ACT), and a member of the governor’s cabinet, introduced the governor. He enumerated the various state government’s economic plans, especially the 777 project of the governor, which is geared to help create jobs for Floridians. He said that the Heritage Month reception was begun three years ago under then Governor Crist, He then thanked Governor Scott, on behalf of Asian Americans, for continuing the tradition. He specifically thanked the Governor for appointing Ananth Prasad, an Indian American to head the Florida Department

of Transportation, a state agency. “This Heritage Month is a special opportunity,” the governor said in his speech,” to acknowledge and honor the achievements of Asian Americans, and communicate to the community the diverse contributions of Asian Americans to the overall vigor and vitality of the economy in the State. He also introduced his wife Anne (they were married since they were 19 years old) stating that they also nurtured the American dream and began from simple beginnings to the Governor’s Mansion. He said he and his wife have begun studying the Mandarin dialect.

Ms. Chao, an American of Chinese ancestry, spoke of her early years in the country, speaking no English at age 8, but nurturing a dream to one day achieve the American dream. She did, from a one bedroom apartment in New York City to becoming Labor Secretary, the only Asian so honored.

Elaine Chao 趙小蘭, the first Asian Pacific American woman and first Chinese American appointed to a President’s cabinet in American history. She served as the United States Secretary of Labor from 2001 to 2009. 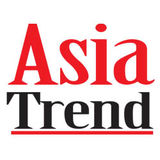