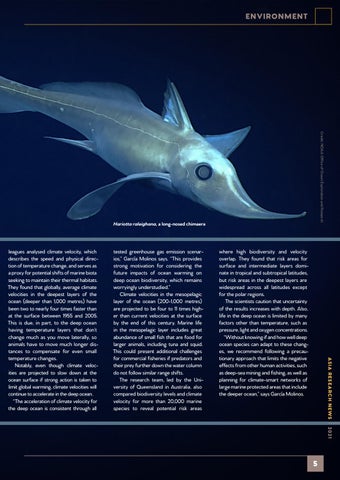 tested greenhouse gas emission scenarios,” García Molinos says. “This provides strong motivation for considering the future impacts of ocean warming on deep ocean biodiversity, which remains worryingly understudied.” Climate velocities in the mesopelagic layer of the ocean (200-1,000 metres) are projected to be four to 11 times higher than current velocities at the surface by the end of this century. Marine life in the mesopelagic layer includes great abundance of small fish that are food for larger animals, including tuna and squid. This could present additional challenges for commercial fisheries if predators and their prey further down the water column do not follow similar range shifts. The research team, led by the University of Queensland in Australia, also compared biodiversity levels and climate velocity for more than 20,000 marine species to reveal potential risk areas

where high biodiversity and velocity overlap. They found that risk areas for surface and intermediate layers dominate in tropical and subtropical latitudes, but risk areas in the deepest layers are widespread across all latitudes except for the polar regions. The scientists caution that uncertainty of the results increases with depth. Also, life in the deep ocean is limited by many factors other than temperature, such as pressure, light and oxygen concentrations. “Without knowing if and how well deep ocean species can adapt to these changes, we recommend following a precautionary approach that limits the negative effects from other human activities, such as deep-sea mining and fishing, as well as planning for climate-smart networks of large marine protected areas that include the deeper ocean,” says García Molinos.