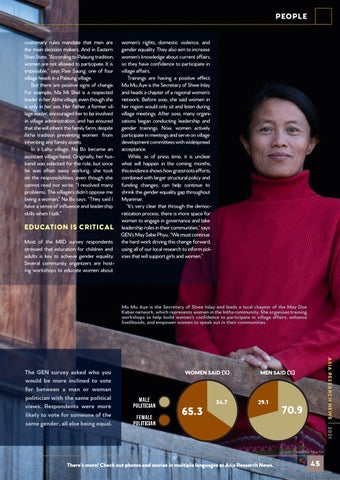 PEOPLE customary rules mandate that men are the main decision makers. And in Eastern Shan State, “According to Palaung tradition, women are not allowed to participate. It is impossible,” says Paw Saung, one of four village heads in a Palaung village. But there are positive signs of change. For example, Ma Mi Shel is a respected leader in her Akha village, even though she is only in her 20s. Her father, a former village leader, encouraged her to be involved in village administration, and has ensured that she will inherit the family farm, despite Akha tradition preventing women from inheriting any family assets. In a Lahu village, Na Bo became an assistant village head. Originally, her husband was selected for the role, but since he was often away working, she took on the responsibilities, even though she cannot read nor write. “I resolved many problems. The villagers didn’t oppose me being a woman,” Na Bo says. “They said I have a sense of influence and leadership skills when I talk.”

EDUCATION IS CRITICAL Most of the MIID survey respondents stressed that education for children and adults is key to achieve gender equality. Several community organizers are hosting workshops to educate women about

women’s rights, domestic violence, and gender equality. They also aim to increase women’s knowledge about current affairs, so they have confidence to participate in village affairs. Trainings are having a positive effect. Mu Mu Aye is the Secretary of Shwe Inlay and heads a chapter of a regional women’s network. Before 2010, she said women in her region would only sit and listen during village meetings. After 2010, many organizations began conducting leadership and gender trainings. Now, women actively participate in meetings and serve on village development committees with widespread acceptance. While, as of press time, it is unclear what will happen in the coming months, this evidence shows how grassroots efforts, combined with larger structural policy and funding changes, can help continue to shrink the gender equality gap throughout Myanmar. “It’s very clear that through the democratization process, there is more space for women to engage in governance and take leadership roles in their communities,” says GEN’s May Sabe Phyu. “We must continue the hard work driving this change forward, using all of our local research to inform policies that will support girls and women.”

Mu Mu Aye is the Secretary of Shwe Inlay and leads a local chapter of the May Doe Kabar network, which represents women in the Intha community. She organises training workshops to help build women’s confidence to participate in village affairs, enhance livelihoods, and empower women to speak out in their communities.

The GEN survey asked who you would be more inclined to vote for between a man or woman politician with the same political views. Respondents were more likely to vote for someone of the same gender, all else being equal.