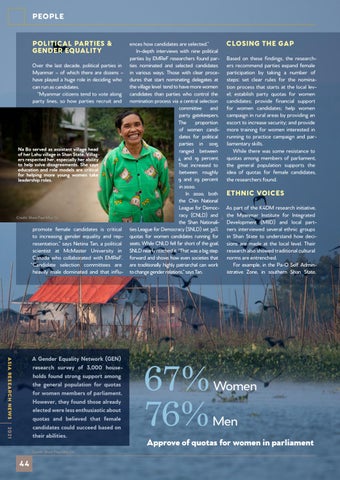 PEOPLE POLITICAL PARTIES &amp; GENDER EQUALITY Over the last decade, political parties in Myanmar – of which there are dozens – have played a huge role in deciding who can run as candidates. “Myanmar citizens tend to vote along party lines, so how parties recruit and

promote female candidates is critical to increasing gender equality and representation,” says Netina Tan, a political scientist at McMaster University in Canada who collaborated with EMReF. “Candidate selection committees are heavily male dominated and that influ-

A Gender Equality Network (GEN) research survey of 3,000 households found strong support among the general population for quotas for women members of parliament. However, they found those already elected were less enthusiastic about quotas and believed that female candidates could succeed based on their abilities.

ences how candidates are selected.” In-depth interviews with nine political parties by EMReF researchers found parties nominated and selected candidates in various ways. Those with clear procedures that start nominating delegates at the village level tend to have more women candidates than parties who control the nomination process via a central selection committee and party gatekeepers. The proportion of women candidates for political parties in 2015 ranged between 4 and 19 percent. That increased to between roughly 9 and 29 percent in 2020. In 2020, both the Chin National League for Democracy (CNLD) and the Shan Nationalities League for Democracy (SNLD) set 30% quotas for women candidates running for seats. While CNLD fell far short of the goal, SNLD nearly reached it. “That was a big step forward and shows how even societies that are traditionally highly patriarchal can work to change gender relations,” says Tan.

CLOSING THE GAP Based on these findings, the researchers recommend parties expand female participation by taking a number of steps: set clear rules for the nomination process that starts at the local level; establish party quotas for women candidates; provide financial support for women candidates; help women campaign in rural areas by providing an escort to increase security; and provide more training for women interested in running to practice campaign and parliamentary skills. While there was some resistance to quotas among members of parliament, the general population supports the idea of quotas for female candidates, the researchers found.

ETHNIC VOICES As part of the K4DM research initiative, the Myanmar Institute for Integrated Development (MIID) and local partners interviewed several ethnic groups in Shan State to understand how decisions are made at the local level. Their research also showed traditional cultural norms are entrenched. For example, in the Pa-O Self Administrative Zone, in southern Shan State,

Approve of quotas for women in parliament