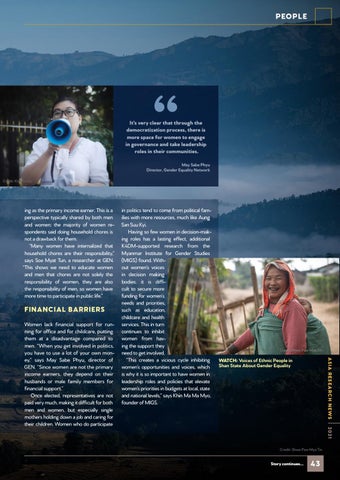 It’s very clear that through the democratization process, there is more space for women to engage in governance and take leadership roles in their communities. May Sabe Phyu Director, Gender Equality Network Credit: Khin Su Kyi

ing as the primary income earner. This is a perspective typically shared by both men and women: the majority of women respondents said doing household chores is not a drawback for them. “Many women have internalized that household chores are their responsibility,” says Soe Myat Tun, a researcher at GEN. “This shows we need to educate women and men that chores are not solely the responsibility of women, they are also the responsibility of men, so women have more time to participate in public life.”

Women lack financial support for running for office and for childcare, putting them at a disadvantage compared to men. “When you get involved in politics, you have to use a lot of your own money,” says May Sabe Phyu, director of GEN. “Since women are not the primary income earners, they depend on their husbands or male family members for financial support.” Once elected, representatives are not paid very much, making it difficult for both men and women, but especially single mothers holding down a job and caring for their children. Women who do participate

in politics tend to come from political families with more resources, much like Aung San Suu Kyi. Having so few women in decision-making roles has a lasting effect, additional K4DM-supported research from the Myanmar Institute for Gender Studies (MIGS) found. Without women’s voices in decision making bodies, it is difficult to secure more funding for women’s needs and priorities, such as education, childcare and health services. This in turn continues to inhibit women from having the support they need to get involved. “This creates a vicious cycle inhibiting women’s opportunities and voices, which is why it is so important to have women in leadership roles and policies that elevate women’s priorities in budgets at local, state and national levels,” says Khin Ma Ma Myo, founder of MIGS.