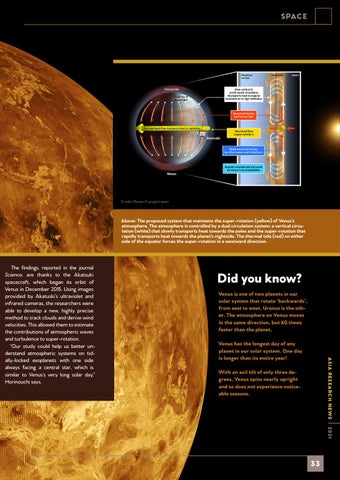 Did you know? Venus is one of two planets in our solar system that rotate ‘backwards’, from east to west. Uranus is the other. The atmosphere on Venus moves in the same direction, but 60 times faster than the planet. Venus has the longest day of any planet in our solar system. One day is longer than its entire year!

The findings, reported in the journal Science, are thanks to the Akatsuki spacecraft, which began its orbit of Venus in December 2015. Using images provided by Akatuski’s ultraviolet and infrared cameras, the researchers were able to develop a new, highly precise method to track clouds and derive wind velocities. This allowed them to estimate the contributions of atmospheric waves and turbulence to super-rotation. “Our study could help us better understand atmospheric systems on tidally-locked exoplanets with one side always facing a central star, which is similar to Venus’s very long solar day,” Horinouchi says.

With an axil tilt of only three degrees, Venus spins nearly upright and so does not experience noticeable seasons.