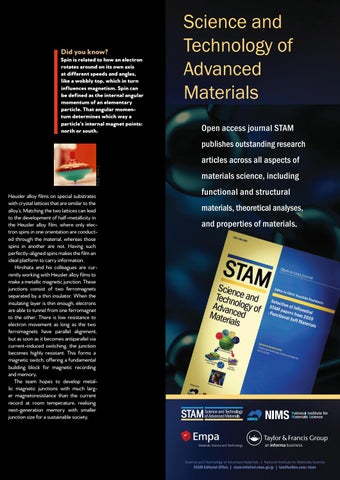 Spin is related to how an electron rotates around on its own axis at different speeds and angles, like a wobbly top, which in turn influences magnetism. Spin can be defined as the internal angular momentum of an elementary particle. That angular momentum determines which way a particle’s internal magnet points: north or south.

Heusler alloy films on special substrates with crystal lattices that are similar to the alloy’s. Matching the two lattices can lead to the development of half-metallicity in the Heusler alloy film, where only electron spins in one orientation are conducted through the material, whereas those spins in another are not. Having such perfectly-aligned spins makes the film an ideal platform to carry information. Hirohata and his colleagues are currently working with Heusler alloy films to make a metallic magnetic junction. These junctions consist of two ferromagnets separated by a thin insulator. When the insulating layer is thin enough, electrons are able to tunnel from one ferromagnet to the other. There is low resistance to electron movement as long as the two ferromagnets have parallel alignment, but as soon as it becomes antiparallel via current-induced switching, the junction becomes highly resistant. This forms a magnetic switch, offering a fundamental building block for magnetic recording and memory. The team hopes to develop metallic magnetic junctions with much larger magnetoresistance than the current record at room temperature, realising next-generation memory with smaller junction size for a sustainable society.