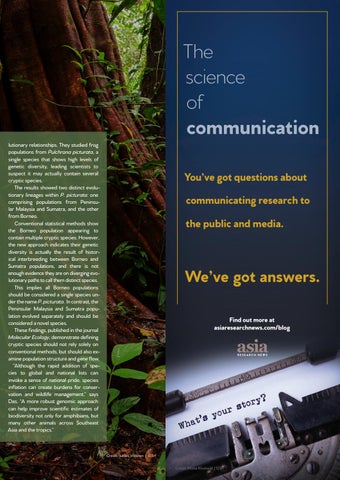 The science of communication

lutionary relationships. They studied frog populations from Pulchrana picturata, a single species that shows high levels of genetic diversity, leading scientists to suspect it may actually contain several cryptic species. The results showed two distinct evolutionary lineages within P. picturata: one comprising populations from Peninsular Malaysia and Sumatra, and the other from Borneo. Conventional statistical methods show the Borneo population appearing to contain multiple cryptic species. However, the new approach indicates their genetic diversity is actually the result of historical interbreeding between Borneo and Sumatra populations, and there is not enough evidence they are on diverging evolutionary paths to call them distinct species. This implies all Borneo populations should be considered a single species under the name P. picturata. In contrast, the Peninsular Malaysia and Sumatra population evolved separately and should be considered a novel species. These findings, published in the journal Molecular Ecology, demonstrate defining cryptic species should not rely solely on conventional methods, but should also examine population structure and gene flow. “Although the rapid addition of species to global and national lists can invoke a sense of national pride, species inflation can create burdens for conservation and wildlife management,” says Das. “A more robust genomic approach can help improve scientific estimates of biodiversity not only for amphibians, but many other animals across Southeast Asia and the tropics.”

You’ve got questions about communicating research to the public and media.

We’ve got answers. Find out more at asiaresearchnews.com/blog