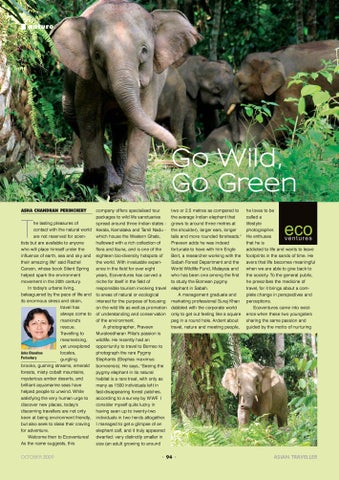 he lasting pleasures of contact with the natural world are not reserved for scientists but are available to anyone who will place himself under the influence of earth, sea and sky and their amazing life&quot; said Rachel Carson, whose book Silent Spring helped spark the environment movement in the 20th century. In today&#39;s urbane living, beleaguered by the pace of life and its enormous stress and strain, travel has always come to mankind&#39;s rescue. Travelling to mesmerising, yet unexplored locales, Asha Chandran Perinchery gurgling brooks, gushing streams, emerald forests, misty cobalt mountains, mysterious amber deserts, and brilliant aquamarine seas have helped people to unwind. While satisf ying the very human urge to discover new places, today&#39;s discerning travellers are not only keen at being environment friendly, but also seek to slake their craving for adventure. Welcome then to Ecoventures! As the name suggests, this

company of fers specialised tour packages to wild life sanctuaries spread around three Indian states Kerala, Karnataka and Tamil Nadu which house the Western Ghats, hallowed with a rich collection of flora and fauna, and is one of the eighteen bio-diversity hotspots of the world. With invaluable experience in the field for over eight years, Ecoventures has carved a niche for itself in the field of responsible tourism involving travel to areas of natural or ecological interest for the purpose of focusing on the wild life as well as promotion of understanding and conser vation of the environment. A photographer, Praveen Muraleedharan Pillai&#39;s passion is wildlife. He recently had an opportunity to travel to Borneo to photograph the rare Pygmy Elephants (Elephas ma ximus borneensis). He says, &quot;Seeing the pygmy elephant in its natural habitat is a rare treat, with only as many as 1500 individuals lef t in fast-disappearing forest patches, according to a survey by W WF. I consider myself quite lucky in having seen up to twenty-two individuals in t wo herds altogether. I managed to get a glimpse of an elephant calf, and it truly appeared dwar fed: very distinctly smaller in size (an adult growing to around

t wo or 2.5 metres as compared to the average Indian elephant that grows to around three metres at the shoulder), larger ears, longer tails and more rounded foreheads.&quot; Praveen adds he was indeed fortunate to have with him Engle Bert, a researcher working with the Sabah Forest Department and the World Wildlife Fund, Malaysia and who has been one among the first to study the Bornean pygmy elephant in Sabah. A management graduate and marketing professional Suraj Khan dabbled with the corporate world only to get out feeling like a square peg in a round hole. Ardent about travel, nature and meeting people,

he loves to be called a lifestyle photographer. He enthuses that he is addicted to life and wants to leave footprints in the sands of time. He avers that life becomes meaningful when we are able to give back to the society. To the general public, he prescribes the medicine of travel, for it brings about a complete change in perspectives and perceptions. Ecoventures came into existence when these t wo youngsters sharing the same passion and guided by the mot to of nurturing 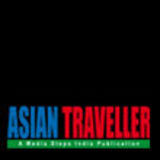