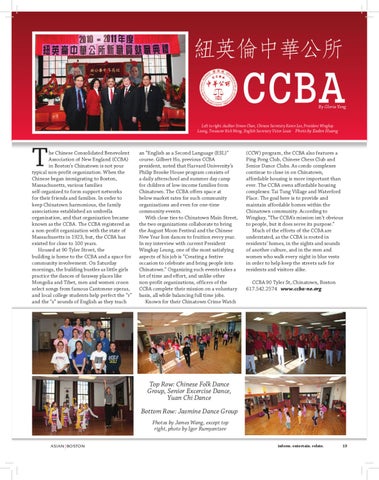 he Chinese Consolidated Benevolent Association of New England (CCBA) in Boston’s Chinatown is not your typical non-profit organization. When the Chinese began immigrating to Boston, Massachusetts, various families self-organized to form support networks for their friends and families. In order to keep Chinatown harmonious, the family associations established an umbrella organization, and that organization became known as the CCBA. The CCBA registered as a non-profit organization with the state of Massachusetts in 1923, but, the CCBA has existed for close to 100 years. Housed at 90 Tyler Street, the building is home to the CCBA and a space for community involvement. On Saturday mornings, the building bustles as little girls practice the dances of faraway places like Mongolia and Tibet, men and women croon select songs from famous Cantonese operas, and local college students help perfect the “r” and the “s” sounds of English as they teach

an “English as a Second Language (ESL)” course. Gilbert Ho, previous CCBA president, noted that Harvard University’s Philip Brooke House program consists of a daily afterschool and summer day camp for children of low-income families from Chinatown. The CCBA offers space at below market rates for such community organizations and even for one-time community events. With close ties to Chinatown Main Street, the two organizations collaborate to bring the August Moon Festival and the Chinese New Year lion dances to fruition every year. In my interview with current President Wingkay Leung, one of the most satisfying aspects of his job is “Creating a festive occasion to celebrate and bring people into Chinatown.” Organizing such events takes a lot of time and effort, and unlike other non-profit organizations, officers of the CCBA complete their mission on a voluntary basis, all while balancing full time jobs. Known for their Chinatown Crime Watch

(CCW) program, the CCBA also features a Ping Pong Club, Chinese Chess Club and Senior Dance Clubs. As condo complexes continue to close in on Chinatown, affordable housing is more important than ever. The CCBA owns affordable housing complexes: Tai Tung Village and Waterford Place. The goal here is to provide and maintain affordable homes within the Chinatown community. According to Wingkay, “The CCBA’s mission isn’t obvious to people, but it does serve its purpose.” Much of the efforts of the CCBA are understated, as the CCBA is rooted in residents’ homes, in the sights and sounds of another culture, and in the men and women who walk every night in blue vests in order to help keep the streets safe for residents and visitors alike. CCBA 90 Tyler St, Chinatown, Boston 617.542.2574 www.ccba-ne.org