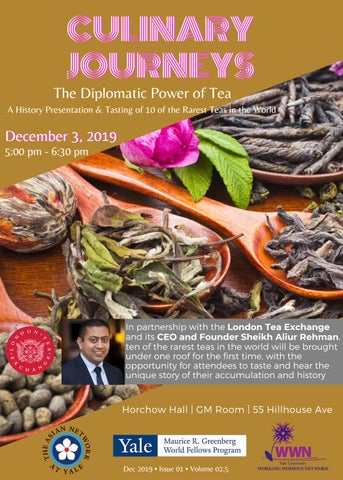 The Diplomatic Power of Tea

A History Presentation &amp; Tasting of 10 of the Rarest Teas in the World

In partnership with the London Tea Exchange and its CEO and Founder Sheikh Aliur Rehman, ten of the rarest teas in the world will be brought under one roof for the first time, with the opportunity for attendees to taste and hear the unique story of their accumulation and history

Sheikh Aliur Rahman is the Chief Executive of London Tea Exchange, one of the leading luxury tea merchants in Europe. Prior to joining the London Tea Exchange he worked for a private investment company in the City of London where he worked as an investment analyst. Aliur continues to act as an advisor to a number of high profile clients on investments and special interest projects. Aliur has been at the forefront of working with large investment projects and has worked extensively amongst the private and public sector. Aliur currently holds various advisory roles at a regional and national level and remains active in major investment programmes. He has been prominent in representing investment companies in many of the leading emerging countries and has been involved in major projects in Europe, Africa, Middle East and Asia. Through his travels Aliur has developed a passion for tea. In 2003 Aliur focused his energy in taking over the London Tea Exchange and started the process of collecting rare and premium teas from around the world. Today, London Tea Exchange has one of the largest collections of rare and premium teas in the world and is renowned amongst tea connoisseurs and collectors from across the globe. Authentic to the core, yet loyal to a set of powerful values, the company has evolved and carved an enviable niche in the global luxury tea market and has aims to expand into twenty countries by 2021. As news of the London Tea Exchange spreads Aliur has already been recognized by a number of bodies. In 2016 UKBCCI awarded London Tea Exchange with the ‘Best Product’ category and in 2017 Aliur was awarded ‘Entrepreneur of the Year’. The British Bangladeshi Business Awards also recognised Aliur’s work and awarded him with the ‘Award for Innovation’ in the same year. In 2018 Aliur was awarded the Civic Award by the London Borough of Tower Hamlets for his contribution to business and local community. Aliur is well known for his philanthropic contributions and his investment legacy programmes which focus on leaving a lasting legacy after W Eevery L L Nmajor ESS SPA investment. Aliur continues to support a number of leading charities working with young people from deprived backgrounds and communities across the globe. His ambition is to help local communities across the UK to benefit from public and private sector investments with long term legacies.

Da Hong Pao - Big Red Robe Da Hong Pao (Translated - Big Red Robe) is one of the rearrests tea in the world. The tea is grown in the Wuyi Mountains. It is a heavily oxidized, dark oolong tea. It is one of the most expensive tea in the world. Due to its high quality, Da Hong Pao tea is usually reserved by the government for state visits or honored guests visiting China. It is reported that when President Nixon visited China in 1972, he was given 50g as a gift and it was explained to him that the tea was worth (in todayâ&amp;#x20AC;&amp;#x2122;s money, about $250,000). London Tea Exchange is proud to be one of the few merchants in the world to have this tea from the original plants.

Fujian province, China Oolong Tea None Not available to the public

Golden Bengal Tea In seeking to create one of the most exclusive tea in the world, London Tea Exchange looked at teas from around the world and finally selected a plantation in Sylhet, Bangladesh. The tea was selected due to its unique taste. It is one of the finest teas available in the world. This single estate tea is carefully processed by hand. Noted for its signature golden colour, its rich, malty taste and unrivalled sweet aroma it celebrates the very essence of Sylhet and its rich tea culture. London Tea Exchange wanted to name the tea which is linked to the history of the region. We finally named the tea Golden Bengal after the song Amar Sonar Bangla. In 1905 Rabindranath Tagore wrote the song Amar Sonar Bangla (Translated - My Golden Bengal) after the first partition of Bengal. Along with a host of others, songs such as this were meant to rekindle the unified spirit of Bengal. In 1913 Rabindranath Tagore became the first non-European to win the Nobel Prize in Literature. In 1971 the first 10 lines of the song was adopted as the nation anthem of Bangladesh.

Emperors Palace Tea We are extremely proud to have this unique tea. The Tea was gifted to the London Tea Exchange CEO by the former Emperor of Japan, His Majesty Emperor Akihito. The tea was an exchange organised by the London Tea Exchange as part of the Nobel Tea Chest collection, where His Majesty wanted his tea to represent Japan within the Nobel Collection. The Tea is usually only offered in state visits or guests visiting the Emperor in the palace. Very few people have ever tasted this tea and we look forward to sharing this tea. Over 180 kg of tea is used to make just 1 kg of this unique tea. The tea is famous for its unique taste and character unlike any other green tea in the world.

Kagoshima, Japan Green Tea Buds from wild ancient forest of Yunnan Not available to the public

White Pearl The White Pearls are harvest once a year at early March from the ancient wild tea forest of Yunnan, making it one of the prised teas within the London Tea Collection. We are limited to only two KGâ&amp;#x20AC;&amp;#x2122;s a year so the tea is served only in special occasions. After a long, cold winter, the wild trees start to grow new branches in the early spring. For protecting new branches, their shapes look like buds or shoots. This tea was one of the most expensive teas in China, now a similar tea called Ya Bao has been introduced in the market and very few merchants in the world would have this tea. The tea is famous for its special shape and unique nutty aroma. The taste is very delicate with a honey sweet taste.

Sea of Blossoms he tea is one of the most complex teas within the London Tea Exchange. Made from 100 types of blossoms from 2 different countries it has taken the London Tea Exchange 4.5 years to bring together. This rare infusion has been masterfully blended with an array of blossoms. It was developed to celebrate the beauty of blossoms from around the world. A soothing and relaxing cup ensuring a sublime moment of peace. The tea was one of 28 developed for the Nobel Collection and has a complex flavour.

Mountain Gold One of the most unique black teas within the London Tea Exchange collection, the tea comes from the ancient forest of Yunnan from tea trees over 1,500 years old. This tea is available to one or two private tea merchants in the world. The taste of this tea is unique with an earthy note. The tea is picked in early spring and although a black tea, the leaf has a golden colour. It took the London Tea Exchange over six years to acquire this tea one of the longest process for any teas. It is extremely rare to find this tea and we are truly honoured to to be able to share this tea

Mayor’s Blend Taiwan’s oolong teas are considered to be one of the best Oolong tea’s in the world. Alishan High Mountain Oolongs are considered one the best in Taiwan and the sought after of Taiwan’s oolongs are the competition grade Oolongs. Only 5kg’s of this tea is produced a year. To add a twist to this tea, London Tea Exchange decided to develop a blend using this tea. The link is in the name of the tea! London Tea Exchange is proud to share this rare top competition grade Oolong.

Shangri La One of the highest grown teas in the world, the Shangri la is a unique white tea from Nepal. The teas are distinctive in appearance, aroma and taste, but are similar in many ways to tea produced in Darjeeling, perhaps because the eastern zones of Nepal have geography and topography similar to Darjeeling. Its relatively smaller production quantities mean that teas from Nepal are less well known. Few tea merchants actually visit the Himalayan region, but the teas are one of the finest in the world. London Tea Exchange source teas from small farmers growing teas over 7,000 feet above the sea level giving the tea a unique taste unlike any other teas in the world.

The Diplomatic Power of Tea A History Presentation &amp; Tasting of 10 of the Rarest Teas in the World This special event kicks off the Asian Network at Yaleâ&amp;#x20AC;&amp;#x2122;s Culinary Journeys Series featuring chefs and culinary entrepreneurs exploring the foods and cultures of Asia and Asian America. Keep following us for more! 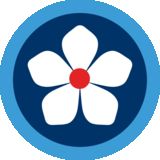