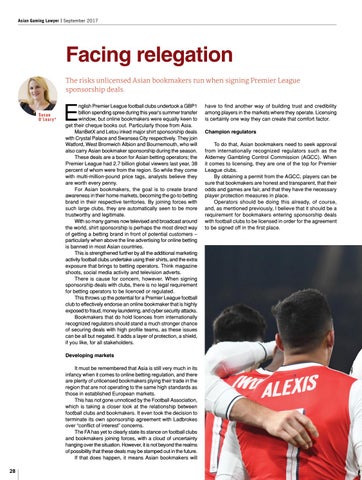 nglish Premier League football clubs undertook a GBP1 billion spending spree during this year’s summer transfer window, but online bookmakers were equally keen to get their cheque books out. Particularly those from Asia. ManBetX and Letou inked major shirt sponsorship deals with Crystal Palace and Swansea City respectively. They join Watford, West Bromwich Albion and Bournemouth, who will also carry Asian bookmaker sponsorship during the season. These deals are a boon for Asian betting operators; the Premier League had 2.7 billion global viewers last year, 38 percent of whom were from the region. So while they come with multi-million-pound price tags, analysts believe they are worth every penny. For Asian bookmakers, the goal is to create brand awareness in their home markets, becoming the go-to betting brand in their respective territories. By joining forces with such large clubs, they are automatically seen to be more trustworthy and legitimate. With so many games now televised and broadcast around the world, shirt sponsorship is perhaps the most direct way of getting a betting brand in front of potential customers – particularly when above the line advertising for online betting is banned in most Asian countries. This is strengthened further by all the additional marketing activity football clubs undertake using their shirts, and the extra exposure that brings to betting operators. Think magazine shoots, social media activity and television adverts. There is cause for concern, however. When signing sponsorship deals with clubs, there is no legal requirement for betting operators to be licenced or regulated. This throws up the potential for a Premier League football club to effectively endorse an online bookmaker that is highly exposed to fraud, money laundering, and cyber security attacks. Bookmakers that do hold licences from internationally recognized regulators should stand a much stronger chance of securing deals with high profile teams, as these issues can be all but negated. It adds a layer of protection, a shield, if you like, for all stakeholders. Developing markets It must be remembered that Asia is still very much in its infancy when it comes to online betting regulation, and there are plenty of unlicensed bookmakers plying their trade in the region that are not operating to the same high standards as those in established European markets. This has not gone unnoticed by the Football Association, which is taking a closer look at the relationship between football clubs and bookmakers. It even took the decision to terminate its own sponsorship agreement with Ladbrokes over “conflict of interest” concerns. The FA has yet to clearly state its stance on football clubs and bookmakers joining forces, with a cloud of uncertainty hanging over the situation. However, it is not beyond the realms of possibility that these deals may be stamped out in the future. If that does happen, it means Asian bookmakers will

have to find another way of building trust and credibility among players in the markets where they operate. Licensing is certainly one way they can create that comfort factor. Champion regulators To do that, Asian bookmakers need to seek approval from internationally recognized regulators such as the Alderney Gambling Control Commission (AGCC). When it comes to licensing, they are one of the top for Premier League clubs. By obtaining a permit from the AGCC, players can be sure that bookmakers are honest and transparent, that their odds and games are fair, and that they have the necessary player protection measures in place. Operators should be doing this already, of course, and, as mentioned previously, I believe that it should be a requirement for bookmakers entering sponsorship deals with football clubs to be licensed in order for the agreement to be signed off in the first place. 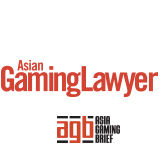