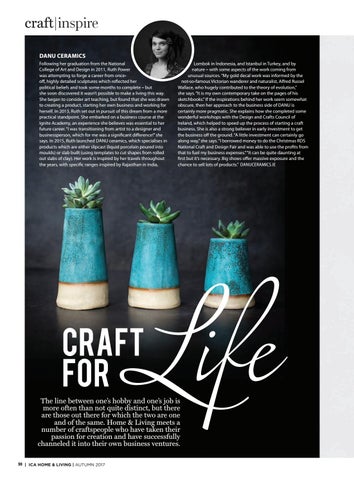 craft|inspire DANU CERAMICS Following her graduation from the National College of Art and Design in 2011, Ruth Power was attempting to forge a career from onceoff, highly detailed sculptures which reflected her political beliefs and took some months to complete – but she soon discovered it wasn’t possible to make a living this way. She began to consider art teaching, but found that she was drawn to creating a product, starting her own business and working for herself. In 2013, Ruth set out in pursuit of this dream from a more practical standpoint. She embarked on a business course at the Ignite Academy, an experience she believes was essential to her future career. “I was transitioning from artist to a designer and businessperson, which for me was a significant difference!” she says. In 2015, Ruth launched DANU ceramics, which specialises in products which are either slipcast (liquid porcelain poured into moulds) or slab built (using templates to cut shapes from rolled out slabs of clay). Her work is inspired by her travels throughout the years, with specific ranges inspired by Rajasthan in India,

Lombok in Indonesia, and Istanbul in Turkey, and by nature – with some aspects of the work coming from unusual sources. “My gold decal work was informed by the not-so-famous Victorian wanderer and naturalist, Alfred Russel Wallace, who hugely contributed to the theory of evolution,” she says. “It is my own contemporary take on the pages of his sketchbooks.” If the inspirations behind her work seem somewhat obscure, then her approach to the business side of DANU is certainly more pragmatic. She explains how she completed some wonderful workshops with the Design and Crafts Council of Ireland, which helped to speed up the process of starting a craft business. She is also a strong believer in early investment to get the business off the ground. “A little investment can certainly go along way,” she says. “I borrowed money to do the Christmas RDS National Craft and Design Fair and was able to use the profits from that to fuel my business expenses.” “It can be quite daunting at first but it’s necessary. Big shows offer massive exposure and the chance to sell lots of products.” DANUCERAMICS.IE

CRAFT FOR The line between one’s hobby and one’s job is more often than not quite distinct, but there are those out there for which the two are one and of the same. Home & Living meets a number of craftspeople who have taken their passion for creation and have successfully channeled it into their own business ventures. 30 | ICA HOME & LIVING | AUTUMN 2017 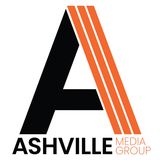