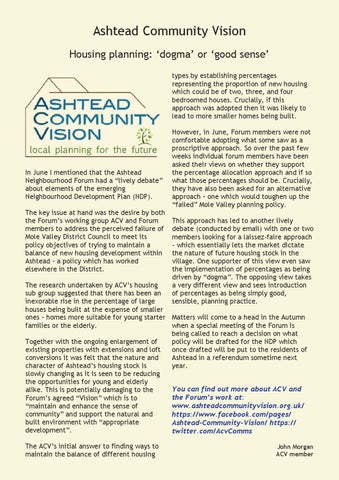 Ashtead Community Vision Housing planning: ‘dogma’ or ‘good sense’ types by establishing percentages representing the proportion of new housing which could be of two, three, and four bedroomed houses. Crucially, if this approach was adopted then it was likely to lead to more smaller homes being built.

In June I mentioned that the Ashtead Neighbourhood Forum had a “lively debate” about elements of the emerging Neighbourhood Development Plan (NDP). The key issue at hand was the desire by both the Forum’s working group ACV and Forum members to address the perceived failure of Mole Valley District Council to meet its policy objectives of trying to maintain a balance of new housing development within Ashtead – a policy which has worked elsewhere in the District.

However, in June, Forum members were not comfortable adopting what some saw as a proscriptive approach. So over the past few weeks individual forum members have been asked their views on whether they support the percentage allocation approach and if so what those percentages should be. Crucially, they have also been asked for an alternative approach – one which would toughen up the “failed” Mole Valley planning policy. This approach has led to another lively debate (conducted by email) with one or two members looking for a laissez-faire approach - which essentially lets the market dictate the nature of future housing stock in the village. One supporter of this view even saw the implementation of percentages as being driven by “dogma”. The opposing view takes a very different view and sees introduction of percentages as being simply good, sensible, planning practice.

The research undertaken by ACV’s housing sub group suggested that there has been an inexorable rise in the percentage of large houses being built at the expense of smaller ones – homes more suitable for young starter Matters will come to a head in the Autumn when a special meeting of the Forum is families or the elderly. being called to reach a decision on what policy will be drafted for the NDP which Together with the ongoing enlargement of once drafted will be put to the residents of existing properties with extensions and loft Ashtead in a referendum sometime next conversions it was felt that the nature and year. character of Ashtead’s housing stock is slowly changing as it is seen to be reducing the opportunities for young and elderly You can find out more about ACV and alike. This is potentially damaging to the the Forum’s work at: Forum’s agreed “Vision” which is to www.ashteadcommunityvision.org.uk/ “maintain and enhance the sense of community” and support the natural and https://www.facebook.com/pages/ built environment with “appropriate Ashtead-Community-Vision/ https:// development”. twitter.com/AcvComms The ACV’s initial answer to finding ways to maintain the balance of different housing