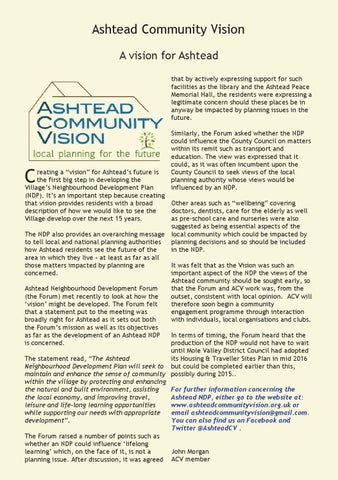 Ashtead Community Vision A vision for Ashtead that by actively expressing support for such facilities as the library and the Ashtead Peace Memorial Hall, the residents were expressing a legitimate concern should these places be in anyway be impacted by planning issues in the future.

Similarly, the Forum asked whether the NDP could influence the County Council on matters within its remit such as transport and education. The view was expressed that it could, as it was often incumbent upon the County Council to seek views of the local planning authority whose views would be influenced by an NDP.

reating a “vision” for Ashtead’s future is the first big step in developing the Village’s Neighbourhood Development Plan (NDP). It’s an important step because creating Other areas such as “wellbeing” covering that vision provides residents with a broad doctors, dentists, care for the elderly as well description of how we would like to see the as pre-school care and nurseries were also Village develop over the next 15 years. suggested as being essential aspects of the The NDP also provides an overarching message local community which could be impacted by planning decisions and so should be included to tell local and national planning authorities in the NDP. how Ashtead residents see the future of the area in which they live – at least as far as all It was felt that as the Vision was such an those matters impacted by planning are important aspect of the NDP the views of the concerned. Ashtead community should be sought early, so that the Forum and ACV work was, from the Ashtead Neighbourhood Development Forum outset, consistent with local opinion. ACV will (the Forum) met recently to look at how the therefore soon begin a community ‘vision’ might be developed. The Forum felt engagement programme through interaction that a statement put to the meeting was with individuals, local organisations and clubs. broadly right for Ashtead as it sets out both the Forum’s mission as well as its objectives In terms of timing, the Forum heard that the as far as the development of an Ashtead NDP production of the NDP would not have to wait is concerned. until Mole Valley District Council had adopted its Housing & Traveller Sites Plan in mid 2016 The statement read, “The Ashtead Neighbourhood Development Plan will seek to but could be completed earlier than this, maintain and enhance the sense of community possibly during 2015.. within the village by protecting and enhancing the natural and built environment, assisting For further information concerning the the local economy, and improving travel, Ashtead NDP, either go to the website at: leisure and life-long learning opportunities www.ashteadcommunityvision.org.uk or email ashteadcommunityvision@gmail.com. while supporting our needs with appropriate You can also find us on Facebook and development”. Twitter @AshteadCV . The Forum raised a number of points such as whether an NDP could influence ‘lifelong John Morgan learning’ which, on the face of it, is not a planning issue. After discussion, it was agreed ACV member 12