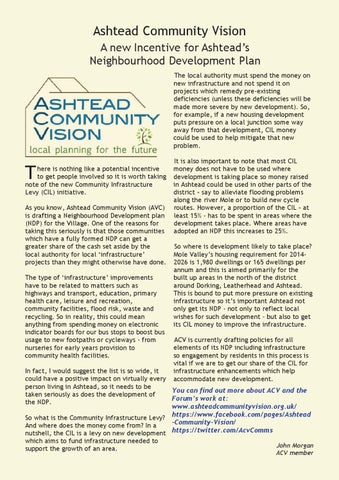 Ashtead Community Vision A new Incentive for Ashtead’s Neighbourhood Development Plan The local authority must spend the money on new infrastructure and not spend it on projects which remedy pre-existing deficiencies (unless these deficiencies will be made more severe by new development). So, for example, if a new housing development puts pressure on a local junction some way away from that development, CIL money could be used to help mitigate that new problem.

here is nothing like a potential incentive to get people involved so it is worth taking note of the new Community Infrastructure Levy (CIL) initiative. As you know, Ashtead Community Vision (AVC) is drafting a Neighbourhood Development plan (NDP) for the Village. One of the reasons for taking this seriously is that those communities which have a fully formed NDP can get a greater share of the cash set aside by the local authority for local ‘infrastructure’ projects than they might otherwise have done. The type of ‘infrastructure’ improvements have to be related to matters such as highways and transport, education, primary health care, leisure and recreation, community facilities, flood risk, waste and recycling. So in reality, this could mean anything from spending money on electronic indicator boards for our bus stops to boost bus usage to new footpaths or cycleways - from nurseries for early years provision to community health facilities.

It is also important to note that most CIL money does not have to be used where development is taking place so money raised in Ashtead could be used in other parts of the district – say to alleviate flooding problems along the river Mole or to build new cycle routes. However, a proportion of the CIL – at least 15% - has to be spent in areas where the development takes place. Where areas have adopted an NDP this increases to 25%. So where is development likely to take place? Mole Valley’s housing requirement for 20142026 is 1,980 dwellings or 165 dwellings per annum and this is aimed primarily for the built up areas in the north of the district around Dorking, Leatherhead and Ashtead. This is bound to put more pressure on existing infrastructure so it’s important Ashtead not only get its NDP - not only to reflect local wishes for such development - but also to get its CIL money to improve the infrastructure. ACV is currently drafting policies for all elements of its NDP including infrastructure so engagement by residents in this process is vital if we are to get our share of the CIL for infrastructure enhancements which help accommodate new development.

In fact, I would suggest the list is so wide, it could have a positive impact on virtually every person living in Ashtead, so it needs to be You can find out more about ACV and the taken seriously as does the development of Forum’s work at: the NDP. www.ashteadcommunityvision.org.uk/ https://www.facebook.com/pages/Ashtead So what is the Community Infrastructure Levy? -Community-Vision/ And where does the money come from? In a nutshell, the CIL is a levy on new development https://twitter.com/AcvComms which aims to fund infrastructure needed to support the growth of an area.