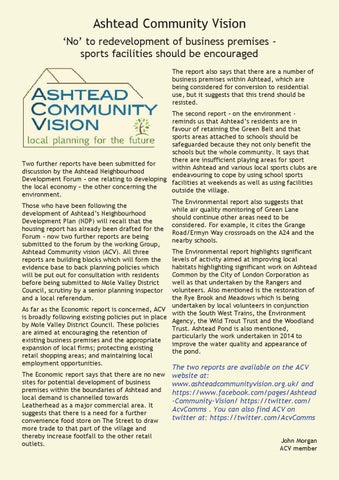 Ashtead Community Vision ‘No’ to redevelopment of business premises sports facilities should be encouraged The report also says that there are a number of business premises within Ashtead, which are being considered for conversion to residential use, but it suggests that this trend should be resisted. The second report – on the environment reminds us that Ashtead’s residents are in favour of retaining the Green Belt and that sports areas attached to schools should be safeguarded because they not only benefit the schools but the whole community. It says that there are insufficient playing areas for sport Two further reports have been submitted for within Ashtead and various local sports clubs are discussion by the Ashtead Neighbourhood endeavouring to cope by using school sports Development Forum – one relating to developing facilities at weekends as well as using facilities the local economy – the other concerning the outside the village. environment. The Environmental report also suggests that Those who have been following the while air quality monitoring of Green Lane development of Ashtead’s Neighbourhood should continue other areas need to be Development Plan (NDP) will recall that the considered. For example, it cites the Grange housing report has already been drafted for the Road/Ermyn Way crossroads on the A24 and the Forum – now two further reports are being nearby schools. submitted to the forum by the working Group, The Environmental report highlights significant Ashtead Community vision (ACV). All three levels of activity aimed at improving local reports are building blocks which will form the habitats highlighting significant work on Ashtead evidence base to back planning policies which Common by the City of London Corporation as will be put out for consultation with residents well as that undertaken by the Rangers and before being submitted to Mole Valley District Council, scrutiny by a senior planning inspector volunteers. Also mentioned is the restoration of the Rye Brook and Meadows which is being and a local referendum. undertaken by local volunteers in conjunction As far as the Economic report is concerned, ACV with the South West Trains, the Environment is broadly following existing policies put in place Agency, the Wild Trout Trust and the Woodland by Mole Valley District Council. These policies Trust. Ashtead Pond is also mentioned, are aimed at encouraging the retention of particularly the work undertaken in 2014 to existing business premises and the appropriate improve the water quality and appearance of expansion of local firms; protecting existing the pond. retail shopping areas; and maintaining local employment opportunities. The Economic report says that there are no new sites for potential development of business premises within the boundaries of Ashtead and local demand is channelled towards Leatherhead as a major commercial area. It suggests that there is a need for a further convenience food store on The Street to draw more trade to that part of the village and thereby increase footfall to the other retail outlets.