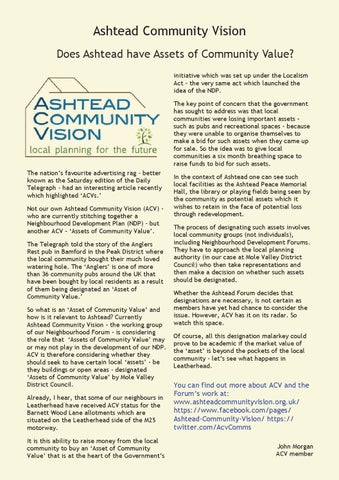 Ashtead Community Vision Does Ashtead have Assets of Community Value? initiative which was set up under the Localism Act – the very same act which launched the idea of the NDP. The key point of concern that the government has sought to address was that local communities were losing important assets – such as pubs and recreational spaces – because they were unable to organise themselves to make a bid for such assets when they came up for sale. So the idea was to give local communities a six month breathing space to raise funds to bid for such assets. The nation’s favourite advertising rag - better known as the Saturday edition of the Daily Telegraph - had an interesting article recently which highlighted ‘ACVs.’

In the context of Ashtead one can see such local facilities as the Ashtead Peace Memorial Hall, the library or playing fields being seen by the community as potential assets which it wishes to retain in the face of potential loss through redevelopment.

Not our own Ashtead Community Vision (ACV) who are currently stitching together a Neighbourhood Development Plan (NDP) - but another ACV – ‘Assets of Community Value’.

The process of designating such assets involves local community groups (not individuals), including Neighbourhood Development Forums. They have to approach the local planning authority (in our case at Mole Valley District Council) who then take representations and then make a decision on whether such assets should be designated.

Whether the Ashtead Forum decides that designations are necessary, is not certain as members have yet had chance to consider the issue. However, ACV has it on its radar. So watch this space. Of course, all this designation malarkey could prove to be academic if the market value of the ‘asset’ is beyond the pockets of the local community - let’s see what happens in Leatherhead.

You can find out more about ACV and the Forum’s work at: www.ashteadcommunityvision.org.uk/ https://www.facebook.com/pages/ Ashtead-Community-Vision/ https:// twitter.com/AcvComms John Morgan ACV member