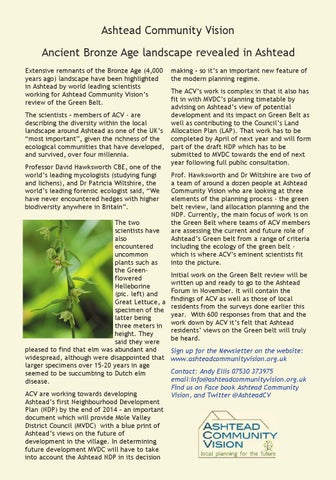 making – so it’s an important new feature of the modern planning regime.

The ACV’s work is complex in that it also has fit in with MVDC’s planning timetable by advising on Ashtead’s view of potential The scientists – members of ACV - are development and its impact on Green Belt as describing the diversity within the local well as contributing to the Council’s Land landscape around Ashtead as one of the UK’s Allocation Plan (LAP). That work has to be “most important”, given the richness of the completed by April of next year and will form ecological communities that have developed, part of the draft NDP which has to be and survived, over four millennia. submitted to MVDC towards the end of next year following full public consultation. Professor David Hawksworth CBE, one of the Prof. Hawksworth and Dr Wiltshire are two of world’s leading mycologists (studying fungi a team of around a dozen people at Ashtead and lichens), and Dr Patricia Wiltshire, the Community Vision who are looking at three world’s leading forensic ecologist said, “We elements of the planning process - the green have never encountered hedges with higher belt review, land allocation planning and the biodiversity anywhere in Britain”. NDP. Currently, the main focus of work is on the Green Belt where teams of ACV members The two are assessing the current and future role of scientists have Ashtead’s Green belt from a range of criteria also including the ecology of the green belt encountered which is where ACV’s eminent scientists fit uncommon into the picture. plants such as the GreenInitial work on the Green Belt review will be flowered written up and ready to go to the Ashtead Helleborine Forum in November. It will contain the (pic. left) and Great Lettuce, a findings of ACV as well as those of local specimen of the residents from the surveys done earlier this year. With 600 responses from that and the latter being three meters in work down by ACV it’s felt that Ashtead residents’ views on the Green belt will truly height. They be heard. said they were pleased to find that elm was abundant and Sign up for the Newsletter on the website: widespread, although were disappointed that www.ashteadcommunityvision.org.uk larger specimens over 15-20 years in age Contact: Andy Ellis 07530 373975 seemed to be succumbing to Dutch elm email:info@ashteadcommunityvision.org.uk disease. Find us on Face book Ashtead Community ACV are working towards developing Vision, and Twitter @AshteadCV Ashtead’s first Neighbourhood Development Plan (NDP) by the end of 2014 – an important document which will provide Mole Valley District Council (MVDC) with a blue print of Ashtead’s views on the future of development in the village. In determining future development MVDC will have to take into account the Ashtead NDP in its decision 16