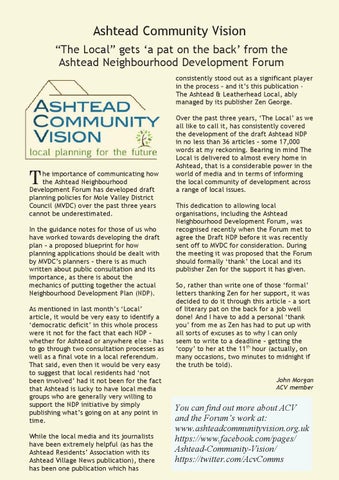 Ashtead Community Vision “The Local” gets ‘a pat on the back’ from the Ashtead Neighbourhood Development Forum consistently stood out as a significant player in the process – and it’s this publication The Ashtead & Leatherhead Local, ably managed by its publisher Zen George. Over the past three years, ‘The Local’ as we all like to call it, has consistently covered the development of the draft Ashtead NDP in no less than 36 articles – some 17,000 words at my reckoning. Bearing in mind The Local is delivered to almost every home in Ashtead, that is a considerable power in the world of media and in terms of informing the local community of development across a range of local issues.

he importance of communicating how the Ashtead Neighbourhood Development Forum has developed draft planning policies for Mole Valley District Council (MVDC) over the past three years cannot be underestimated.

This dedication to allowing local organisations, including the Ashtead Neighbourhood Development Forum, was recognised recently when the Forum met to agree the Draft NDP before it was recently sent off to MVDC for consideration. During the meeting it was proposed that the Forum should formally ‘thank’ the Local and its publisher Zen for the support it has given.

In the guidance notes for those of us who have worked towards developing the draft plan – a proposed blueprint for how planning applications should be dealt with by MVDC’s planners – there is as much written about public consultation and its importance, as there is about the mechanics of putting together the actual Neighbourhood Development Plan (NDP).

So, rather than write one of those ‘formal’ letters thanking Zen for her support, it was decided to do it through this article – a sort of literary pat on the back for a job well done! And I have to add a personal ‘thank you’ from me as Zen has had to put up with all sorts of excuses as to why I can only seem to write to a deadline – getting the ‘copy’ to her at the 11th hour (actually, on many occasions, two minutes to midnight if the truth be told).

As mentioned in last month’s ‘Local’ article, it would be very easy to identify a ‘democratic deficit’ in this whole process were it not for the fact that each NDP – whether for Ashtead or anywhere else – has to go through two consultation processes as well as a final vote in a local referendum. That said, even then it would be very easy to suggest that local residents had ‘not been involved’ had it not been for the fact that Ashtead is lucky to have local media groups who are generally very willing to support the NDP initiative by simply publishing what’s going on at any point in time. While the local media and its journalists have been extremely helpful (as has the Ashtead Residents’ Association with its Ashtead Village News publication), there has been one publication which has