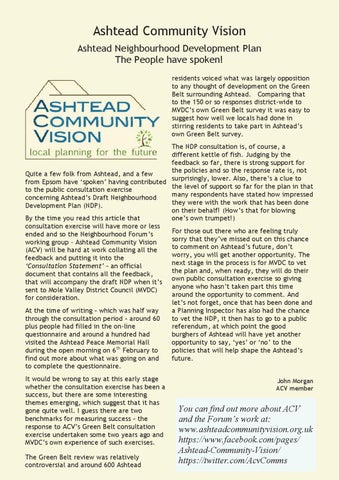 Ashtead Community Vision Ashtead Neighbourhood Development Plan The People have spoken! residents voiced what was largely opposition to any thought of development on the Green Belt surrounding Ashtead. Comparing that to the 150 or so responses district-wide to MVDC’s own Green Belt survey it was easy to suggest how well we locals had done in stirring residents to take part in Ashtead’s own Green Belt survey. The NDP consultation is, of course, a different kettle of fish. Judging by the feedback so far, there is strong support for the policies and so the response rate is, not Quite a few folk from Ashtead, and a few from Epsom have ‘spoken’ having contributed surprisingly, lower. Also, there’s a clue to the level of support so far for the plan in that to the public consultation exercise many respondents have stated how impressed concerning Ashtead’s Draft Neighbourhood they were with the work that has been done Development Plan (NDP). on their behalf! (How’s that for blowing By the time you read this article that one’s own trumpet!) consultation exercise will have more or less For those out there who are feeling truly ended and so the Neighbourhood Forum’s sorry that they’ve missed out on this chance working group - Ashtead Community Vision to comment on Ashtead’s future, don’t (ACV) will be hard at work collating all the worry, you will get another opportunity. The feedback and putting it into the next stage in the process is for MVDC to vet ‘Consultation Statement’ – an official the plan and, when ready, they will do their document that contains all the feedback, own public consultation exercise so giving that will accompany the draft NDP when it’s anyone who hasn’t taken part this time sent to Mole Valley District Council (MVDC) around the opportunity to comment. And for consideration. let’s not forget, once that has been done and At the time of writing – which was half way a Planning Inspector has also had the chance through the consultation period – around 60 to vet the NDP, it then has to go to a public plus people had filled in the on-line referendum, at which point the good questionnaire and around a hundred had burghers of Ashtead will have yet another visited the Ashtead Peace Memorial Hall opportunity to say, ‘yes’ or ‘no’ to the during the open morning on 6th February to policies that will help shape the Ashtead’s find out more about what was going on and future. to complete the questionnaire. It would be wrong to say at this early stage whether the consultation exercise has been a success, but there are some interesting themes emerging, which suggest that it has gone quite well. I guess there are two benchmarks for measuring success – the response to ACV’s Green Belt consultation exercise undertaken some two years ago and MVDC’s own experience of such exercises. The Green Belt review was relatively controversial and around 600 Ashtead