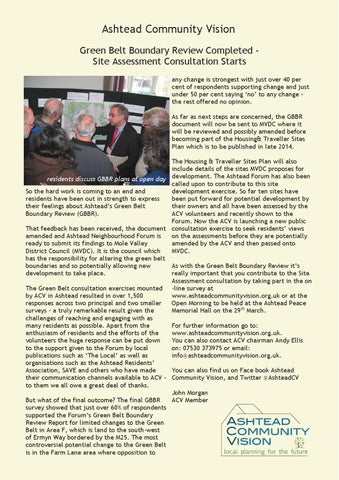 Ashtead Community Vision Green Belt Boundary Review Completed Site Assessment Consultation Starts any change is strongest with just over 40 per cent of respondents supporting change and just under 50 per cent saying ‘no’ to any change – the rest offered no opinion. As far as next steps are concerned, the GBBR document will now be sent to MVDC where it will be reviewed and possibly amended before becoming part of the Housing& Traveller Sites Plan which is to be published in late 2014. The Housing & Traveller Sites Plan will also include details of the sites MVDC proposes for residents discuss GBBR plans at open day development. The Ashtead Forum has also been called upon to contribute to this site development exercise. So far ten sites have So the hard work is coming to an end and been put forward for potential development by residents have been out in strength to express their owners and all have been assessed by the their feelings about Ashtead’s Green Belt ACV volunteers and recently shown to the Boundary Review (GBBR). Forum. Now the ACV is launching a new public That feedback has been received, the document consultation exercise to seek residents’ views on the assessments before they are potentially amended and Ashtead Neighbourhood Forum is amended by the ACV and then passed onto ready to submit its findings to Mole Valley MVDC. District Council (MVDC). It is the council which has the responsibility for altering the green belt As with the Green Belt Boundary Review it’s boundaries and so potentially allowing new really important that you contribute to the Site development to take place. Assessment consultation by taking part in the on The Green Belt consultation exercises mounted -line survey at www.ashteadcommunityvision.org.uk or at the by ACV in Ashtead resulted in over 1,500 Open Morning to be held at the Ashtead Peace responses across two principal and two smaller Memorial Hall on the 29th March. surveys – a truly remarkable result given the challenges of reaching and engaging with as For further information go to: many residents as possible. Apart from the www.ashteadcommunityvision.org.uk. enthusiasm of residents and the efforts of the You can also contact ACV chairman Andy Ellis volunteers the huge response can be put down on: 07530 373975 or email: to the support given to the Forum by local info@ashteadcommunityvision.org.uk. publications such as ‘The Local’ as well as organisations such as the Ashtead Residents’ You can also find us on Face book Ashtead Association, SAVE and others who have made their communication channels available to ACV – Community Vision, and Twitter @AshteadCV to them we all owe a great deal of thanks. John Morgan ACV Member But what of the final outcome? The final GBBR survey showed that just over 60% of respondents supported the Forum’s Green Belt Boundary Review Report for limited changes to the Green Belt in Area F, which is land to the south-west of Ermyn Way bordered by the M25. The most controversial potential change to the Green Belt is in the Farm Lane area where opposition to 12