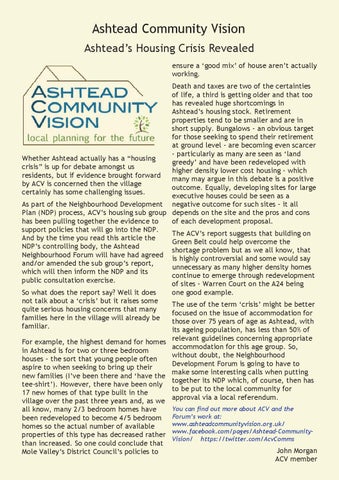 Ashtead Community Vision Ashtead’s Housing Crisis Revealed ensure a ‘good mix’ of house aren’t actually working. Death and taxes are two of the certainties of life, a third is getting older and that too has revealed huge shortcomings in Ashtead’s housing stock. Retirement properties tend to be smaller and are in short supply. Bungalows – an obvious target for those seeking to spend their retirement at ground level - are becoming even scarcer – particularly as many are seen as ‘land Whether Ashtead actually has a “housing greedy’ and have been redeveloped with crisis” is up for debate amongst us higher density lower cost housing – which residents, but if evidence brought forward many may argue in this debate is a positive by ACV is concerned then the village outcome. Equally, developing sites for large certainly has some challenging issues. executive houses could be seen as a As part of the Neighbourhood Development negative outcome for such sites – it all Plan (NDP) process, ACV’s housing sub group depends on the site and the pros and cons of each development proposal. has been pulling together the evidence to support policies that will go into the NDP. The ACV’s report suggests that building on And by the time you read this article the Green Belt could help overcome the NDP’s controlling body, the Ashtead shortage problem but as we all know, that Neighbourhood Forum will have had agreed is highly controversial and some would say and/or amended the sub group’s report, unnecessary as many higher density homes which will then inform the NDP and its continue to emerge through redevelopment public consultation exercise. of sites – Warren Court on the A24 being one good example. So what does the report say? Well it does not talk about a ‘crisis’ but it raises some The use of the term ‘crisis’ might be better quite serious housing concerns that many focused on the issue of accommodation for families here in the village will already be those over 75 years of age as Ashtead, with familiar. its ageing population, has less than 50% of relevant guidelines concerning appropriate For example, the highest demand for homes accommodation for this age group. So, in Ashtead is for two or three bedroom without doubt, the Neighbourhood houses – the sort that young people often Development Forum is going to have to aspire to when seeking to bring up their make some interesting calls when putting new families (I’ve been there and ‘have the together its NDP which, of course, then has tee-shirt’). However, there have been only to be put to the local community for 17 new homes of that type built in the approval via a local referendum. village over the past three years and, as we You can find out more about ACV and the all know, many 2/3 bedroom homes have been redeveloped to become 4/5 bedroom Forum’s work at: www.ashteadcommunityvision.org.uk/ homes so the actual number of available properties of this type has decreased rather www.facebook.com/pages/Ashtead-CommunityVision/ https://twitter.com/AcvComms than increased. So one could conclude that John Morgan Mole Valley’s District Council’s policies to ACV member 12