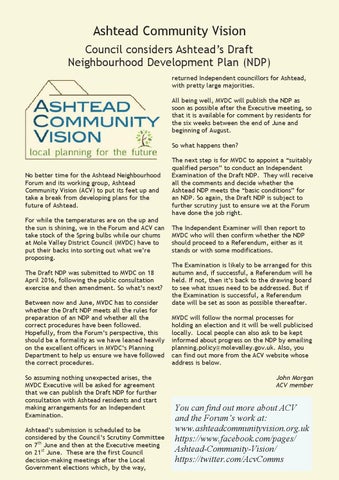 Ashtead Community Vision Council considers Ashtead’s Draft Neighbourhood Development Plan (NDP) returned Independent councillors for Ashtead, with pretty large majorities. All being well, MVDC will publish the NDP as soon as possible after the Executive meeting, so that it is available for comment by residents for the six weeks between the end of June and beginning of August. So what happens then?

No better time for the Ashtead Neighbourhood Forum and its working group, Ashtead Community Vision (ACV) to put its feet up and take a break from developing plans for the future of Ashtead. For while the temperatures are on the up and the sun is shining, we in the Forum and ACV can take stock of the Spring bulbs while our chums at Mole Valley District Council (MVDC) have to put their backs into sorting out what we’re proposing. The Draft NDP was submitted to MVDC on 18 April 2016, following the public consultation exercise and then amendment. So what’s next? Between now and June, MVDC has to consider whether the Draft NDP meets all the rules for preparation of an NDP and whether all the correct procedures have been followed. Hopefully, from the Forum’s perspective, this should be a formality as we have leaned heavily on the excellent officers in MVDC’s Planning Department to help us ensure we have followed the correct procedures.

The next step is for MVDC to appoint a “suitably qualified person” to conduct an Independent Examination of the Draft NDP. They will receive all the comments and decide whether the Ashtead NDP meets the “basic conditions” for an NDP. So again, the Draft NDP is subject to further scrutiny just to ensure we at the Forum have done the job right. The Independent Examiner will then report to MVDC who will then confirm whether the NDP should proceed to a Referendum, either as it stands or with some modifications. The Examination is likely to be arranged for this autumn and, if successful, a Referendum will he held. If not, then it’s back to the drawing board to see what issues need to be addressed. But if the Examination is successful, a Referendum date will be set as soon as possible thereafter. MVDC will follow the normal processes for holding an election and it will be well publicised locally. Local people can also ask to be kept informed about progress on the NDP by emailing planning.policy@molevalley.gov.uk. Also, you can find out more from the ACV website whose address is below. John Morgan ACV member

So assuming nothing unexpected arises, the MVDC Executive will be asked for agreement that we can publish the Draft NDP for further consultation with Ashtead residents and start making arrangements for an Independent Examination. Ashtead’s submission is scheduled to be considered by the Council’s Scrutiny Committee on 7th June and then at the Executive meeting on 21st June. These are the first Council decision-making meetings after the Local Government elections which, by the way,