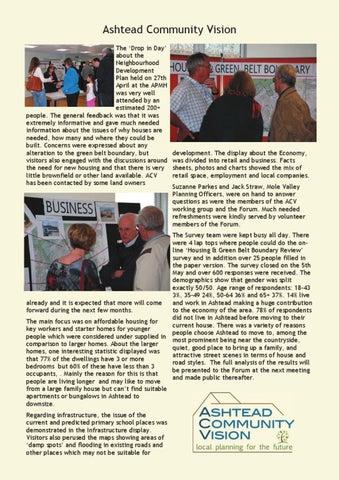 Ashtead Community Vision The ‘Drop in Day’ about the Neighbourhood Development Plan held on 27th April at the APMH was very well attended by an estimated 200+ people. The general feedback was that it was extremely informative and gave much needed information about the issues of why houses are needed, how many and where they could be built. Concerns were expressed about any alteration to the green belt boundary, but visitors also engaged with the discussions around the need for new housing and that there is very little brownfield or other land available. ACV has been contacted by some land owners

development. The display about the Economy, was divided into retail and business. Facts sheets, photos and charts showed the mix of retail space, employment and local companies. Suzanne Parkes and Jack Straw, Mole Valley Planning Officers, were on hand to answer questions as were the members of the ACV working group and the Forum. Much needed refreshments were kindly served by volunteer members of the Forum.

The Survey team were kept busy all day. There were 4 lap tops where people could do the online ‘Housing & Green Belt Boundary Review’ survey and in addition over 25 people filled in the paper version. The survey closed on the 5th May and over 600 responses were received. The demographics show that gender was split exactly 50/50. Age range of respondents: 18-43 3%, 35-49 24%, 50-64 36% and 65+ 37%. 14% live and work in Ashtead making a huge contribution already and it is expected that more will come to the economy of the area. 78% of respondents forward during the next few months. did not live in Ashtead before moving to their The main focus was on affordable housing for current house. There was a variety of reasons key workers and starter homes for younger people choose Ashtead to move to, among the people which were considered under supplied in most prominent being near the countryside, comparison to larger homes. About the larger quiet, good place to bring up a family, and homes, one interesting statistic displayed was attractive street scenes in terms of house and that 77% of the dwellings have 3 or more road styles. The full analysis of the results will bedrooms but 60% of these have less than 3 be presented to the Forum at the next meeting occupants, . Mainly the reason for this is that and made public thereafter. people are living longer and may like to move from a large family house but can’t find suitable apartments or bungalows in Ashtead to downsize. Regarding infrastructure, the issue of the current and predicted primary school places was demonstrated in the Infrastructure display. Visitors also perused the maps showing areas of ‘damp spots’ and flooding in existing roads and other places which may not be suitable for 34