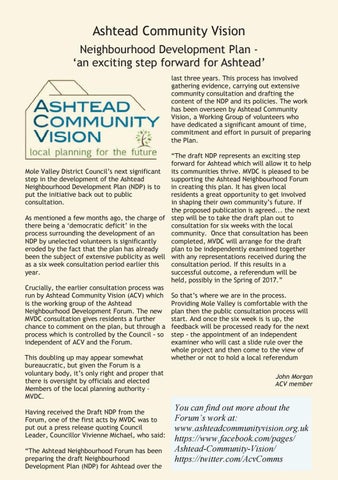 Ashtead Community Vision Neighbourhood Development Plan ‘an exciting step forward for Ashtead’ last three years. This process has involved gathering evidence, carrying out extensive community consultation and drafting the content of the NDP and its policies. The work has been overseen by Ashtead Community Vision, a Working Group of volunteers who have dedicated a significant amount of time, commitment and effort in pursuit of preparing the Plan. “The draft NDP represents an exciting step forward for Ashtead which will allow it to help Mole Valley District Council’s next significant its communities thrive. MVDC is pleased to be step in the development of the Ashtead supporting the Ashtead Neighbourhood Forum Neighbourhood Development Plan (NDP) is to in creating this plan. It has given local put the initiative back out to public residents a great opportunity to get involved in shaping their own community’s future. If consultation. the proposed publication is agreed... the next As mentioned a few months ago, the charge of step will be to take the draft plan out to consultation for six weeks with the local there being a ‘democratic deficit’ in the community. Once that consultation has been process surrounding the development of an completed, MVDC will arrange for the draft NDP by unelected volunteers is significantly plan to be independently examined together eroded by the fact that the plan has already been the subject of extensive publicity as well with any representations received during the consultation period. If this results in a as a six week consultation period earlier this successful outcome, a referendum will be year. held, possibly in the Spring of 2017.” Crucially, the earlier consultation process was run by Ashtead Community Vision (ACV) which So that’s where we are in the process. Providing Mole Valley is comfortable with the is the working group of the Ashtead Neighbourhood Development Forum. The new plan then the public consultation process will start. And once the six week is is up, the MVDC consultation gives residents a further chance to comment on the plan, but through a feedback will be processed ready for the next process which is controlled by the Council – so step - the appointment of an independent examiner who will cast a slide rule over the independent of ACV and the Forum. whole project and then come to the view of This doubling up may appear somewhat whether or not to hold a local referendum bureaucratic, but given the Forum is a voluntary body, it’s only right and proper that John Morgan there is oversight by officials and elected ACV member Members of the local planning authority MVDC. Having received the Draft NDP from the Forum, one of the first acts by MVDC was to put out a press release quoting Council Leader, Councillor Vivienne Michael, who said: “The Ashtead Neighbourhood Forum has been preparing the draft Neighbourhood Development Plan (NDP) for Ashtead over the