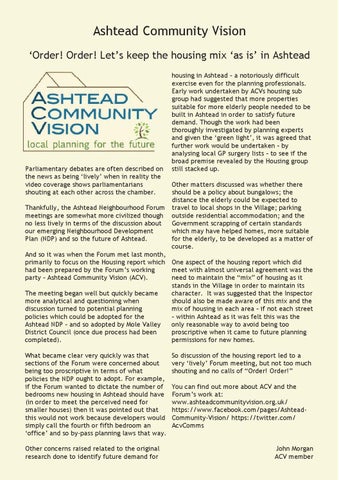 Ashtead Community Vision ‘Order! Order! Let’s keep the housing mix ‘as is’ in Ashtead housing in Ashtead – a notoriously difficult exercise even for the planning professionals. Early work undertaken by ACVs housing sub group had suggested that more properties suitable for more elderly people needed to be built in Ashtead in order to satisfy future demand. Though the work had been thoroughly investigated by planning experts and given the ‘green light’, it was agreed that further work would be undertaken – by analysing local GP surgery lists – to see if the broad premise revealed by the Housing group still stacked up.

Parliamentary debates are often described on the news as being ‘lively’ when in reality the video coverage shows parliamentarians shouting at each other across the chamber.

Other matters discussed was whether there should be a policy about bungalows; the distance the elderly could be expected to Thankfully, the Ashtead Neighbourhood Forum travel to local shops in the Village; parking meetings are somewhat more civilized though outside residential accommodation; and the no less lively in terms of the discussion about Government scrapping of certain standards our emerging Neighbourhood Development which may have helped homes, more suitable Plan (NDP) and so the future of Ashtead. for the elderly, to be developed as a matter of course. And so it was when the Forum met last month, primarily to focus on the Housing report which One aspect of the housing report which did had been prepared by the Forum’s working meet with almost universal agreement was the party – Ashtead Community Vision (ACV). need to maintain the “mix” of housing as it stands in the Village in order to maintain its The meeting began well but quickly became character. It was suggested that the Inspector more analytical and questioning when should also be made aware of this mix and the discussion turned to potential planning mix of housing in each area – if not each street policies which could be adopted for the – within Ashtead as it was felt this was the Ashtead NDP – and so adopted by Mole Valley only reasonable way to avoid being too District Council (once due process had been proscriptive when it came to future planning completed). permissions for new homes. What became clear very quickly was that sections of the Forum were concerned about being too proscriptive in terms of what policies the NDP ought to adopt. For example, if the Forum wanted to dictate the number of bedrooms new housing in Ashtead should have (in order to meet the perceived need for smaller houses) then it was pointed out that this would not work because developers would simply call the fourth or fifth bedroom an ‘office’ and so by-pass planning laws that way.

So discussion of the housing report led to a very ‘lively’ Forum meeting, but not too much shouting and no calls of “Order! Order!” You can find out more about ACV and the Forum’s work at: www.ashteadcommunityvision.org.uk/ https://www.facebook.com/pages/AshteadCommunity-Vision/ https://twitter.com/ AcvComms John Morgan ACV member