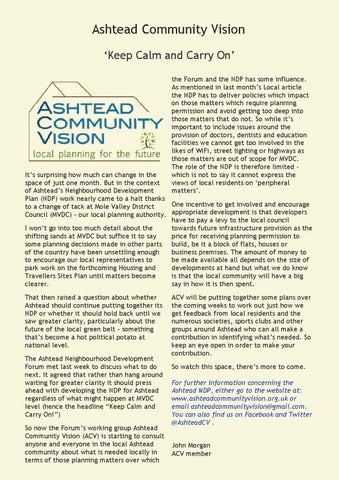 Ashtead Community Vision ‘Keep Calm and Carry On’ the Forum and the NDP has some influence. As mentioned in last month’s Local article the NDP has to deliver policies which impact on those matters which require planning permission and avoid getting too deep into those matters that do not. So while it’s important to include issues around the provision of doctors, dentists and education facilities we cannot get too involved in the likes of WiFi, street lighting or highways as those matters are out of scope for MVDC. The role of the NDP is therefore limited which is not to say it cannot express the views of local residents on ‘peripheral matters’.

It’s surprising how much can change in the space of just one month. But in the context of Ashtead’s Neighbourhood Development Plan (NDP) work nearly came to a halt thanks One incentive to get involved and encourage to a change of tack at Mole Valley District Council (MVDC) – our local planning authority. appropriate development is that developers have to pay a levy to the local council towards future infrastructure provision as the I won’t go into too much detail about the price for receiving planning permission to shifting sands at MVDC but suffice it to say some planning decisions made in other parts build, be it a block of flats, houses or business premises. The amount of money to of the country have been unsettling enough be made available all depends on the size of to encourage our local representatives to developments at hand but what we do know park work on the forthcoming Housing and is that the local community will have a big Travellers Sites Plan until matters become say in how it is then spent. clearer. That then raised a question about whether Ashtead should continue putting together its NDP or whether it should hold back until we saw greater clarity, particularly about the future of the local green belt – something that’s become a hot political potato at national level. The Ashtead Neighbourhood Development Forum met last week to discuss what to do next. It agreed that rather than hang around waiting for greater clarity it should press ahead with developing the NDP for Ashtead regardless of what might happen at MVDC level (hence the headline “Keep Calm and Carry On!”) So now the Forum’s working group Ashtead Community Vision (ACV) is starting to consult anyone and everyone in the local Ashtead community about what is needed locally in terms of those planning matters over which

ACV will be putting together some plans over the coming weeks to work out just how we get feedback from local residents and the numerous societies, sports clubs and other groups around Ashtead who can all make a contribution in identifying what’s needed. So keep an eye open in order to make your contribution. So watch this space, there’s more to come. For further information concerning the Ashtead NDP, either go to the website at: www.ashteadcommunityvision.org.uk or email ashteadcommunityvision@gmail.com. You can also find us on Facebook and Twitter @AshteadCV . John Morgan ACV member 14