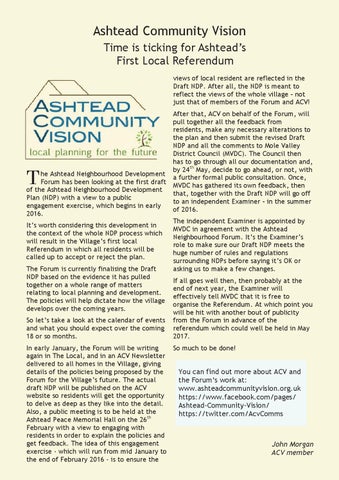 Ashtead Community Vision Time is ticking for Ashtead’s First Local Referendum views of local resident are reflected in the Draft NDP. After all, the NDP is meant to reflect the views of the whole village – not just that of members of the Forum and ACV! After that, ACV on behalf of the Forum, will pull together all the feedback from residents, make any necessary alterations to the plan and then submit the revised Draft NDP and all the comments to Mole Valley District Council (MVDC). The Council then has to go through all our documentation and, by 24th May, decide to go ahead, or not, with he Ashtead Neighbourhood Development a further formal public consultation. Once, Forum has been looking at the first draft MVDC has gathered its own feedback, then of the Ashtead Neighbourhood Development that, together with the Draft NDP will go off Plan (NDP) with a view to a public to an independent Examiner – in the summer engagement exercise, which begins in early of 2016. 2016. The independent Examiner is appointed by It’s worth considering this development in MVDC in agreement with the Ashtead the context of the whole NDP process which Neighbourhood Forum. It’s the Examiner’s will result in the Village’s first local role to make sure our Draft NDP meets the Referendum in which all residents will be huge number of rules and regulations called up to accept or reject the plan. surrounding NDPs before saying it’s OK or The Forum is currently finalising the Draft asking us to make a few changes. NDP based on the evidence it has pulled If all goes well then, then probably at the together on a whole range of matters end of next year, the Examiner will relating to local planning and development. effectively tell MVDC that it is free to The policies will help dictate how the village organise the Referendum. At which point you develops over the coming years. will be hit with another bout of publicity So let’s take a look at the calendar of events from the Forum in advance of the and what you should expect over the coming referendum which could well be held in May 18 or so months. 2017.

In early January, the Forum will be writing So much to be done! again in The Local, and in an ACV Newsletter delivered to all homes in the Village, giving You can find out more about ACV and details of the policies being proposed by the Forum for the Village’s future. The actual the Forum’s work at: draft NDP will be published on the ACV www.ashteadcommunityvision.org.uk website so residents will get the opportunity https://www.facebook.com/pages/ to delve as deep as they like into the detail. Ashtead-Community-Vision/ Also, a public meeting is to be held at the https://twitter.com/AcvComms th Ashtead Peace Memorial Hall on the 26 February with a view to engaging with residents in order to explain the policies and get feedback. The idea of this engagement John Morgan exercise - which will run from mid January to ACV member the end of February 2016 - is to ensure the 14