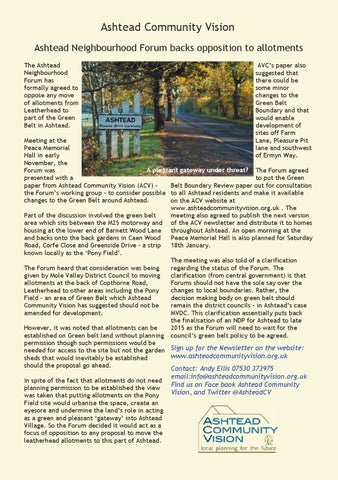 AVC’s paper also suggested that there could be some minor changes to the Green Belt Boundary and that would enable development of sites off Farm Lane, Pleasure Pit lane and southwest of Ermyn Way.

Meeting at the Peace Memorial Hall in early November, the A pleasant gateway under threat? The Forum agreed Forum was presented with a to put the Green paper from Ashtead Community Vision (ACV) – Belt Boundary Review paper out for consultation the Forum’s working group – to consider possible to all Ashtead residents and make it available changes to the Green Belt around Ashtead. on the ACV website at www.ashteadcommunityvision.org.uk . The Part of the discussion involved the green belt meeting also agreed to publish the next version area which sits between the M25 motorway and of the ACV newsletter and distribute it to homes housing at the lower end of Barnett Wood Lane throughout Ashtead. An open morning at the Peace Memorial Hall is also planned for Saturday and backs onto the back gardens in Caen Wood 18th January. Road, Corfe Close and Greenside Drive – a strip known locally as the ‘Pony Field’. The meeting was also told of a clarification regarding the status of the Forum. The The Forum heard that consideration was being clarification (from central government) is that given by Mole Valley District Council to moving Forums should not have the sole say over the allotments at the back of Copthorne Road, changes to local boundaries. Rather, the Leatherhead to other areas including the Pony decision making body on green belt should Field – an area of Green Belt which Ashtead remain the district councils – in Ashtead’s case Community Vision has suggested should not be MVDC. This clarification essentially puts back amended for development. the finalisation of an NDP for Ashtead to late 2015 as the Forum will need to wait for the However, it was noted that allotments can be established on Green belt land without planning council’s green belt policy to be agreed. permission though such permissions would be needed for access to the site but not the garden Sign up for the Newsletter on the website: www.ashteadcommunityvision.org.uk sheds that would inevitably be established should the proposal go ahead. Contact: Andy Ellis 07530 373975 In spite of the fact that allotments do not need planning permission to be established the view was taken that putting allotments on the Pony Field site would urbanise the space, create an eyesore and undermine the land’s role in acting as a green and pleasant ‘gateway’ into Ashtead Village. So the Forum decided it would act as a focus of opposition to any proposal to move the leatherhead allotments to this part of Ashtead.