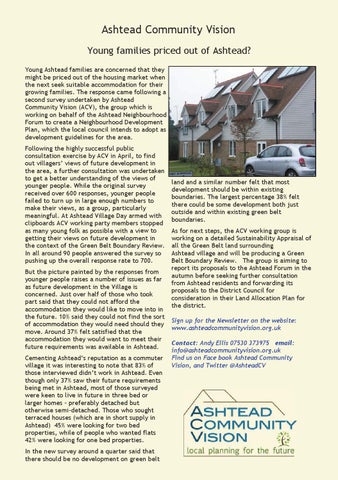 Ashtead Community Vision Young families priced out of Ashtead? Young Ashtead families are concerned that they might be priced out of the housing market when the next seek suitable accommodation for their growing families. The response came following a second survey undertaken by Ashtead Community Vision (ACV), the group which is working on behalf of the Ashtead Neighbourhood Forum to create a Neighbourhood Development Plan, which the local council intends to adopt as development guidelines for the area. Following the highly successful public consultation exercise by ACV in April, to find out villagers’ views of future development in the area, a further consultation was undertaken to get a better understanding of the views of younger people. While the original survey received over 600 responses, younger people failed to turn up in large enough numbers to make their views, as a group, particularly meaningful. At Ashtead Village Day armed with clipboards ACV working party members stopped as many young folk as possible with a view to getting their views on future development in the context of the Green Belt Boundary Review. In all around 90 people answered the survey so pushing up the overall response rate to 700. But the picture painted by the responses from younger people raises a number of issues as far as future development in the Village is concerned. Just over half of those who took part said that they could not afford the accommodation they would like to move into in the future. 10% said they could not find the sort of accommodation they would need should they move. Around 37% felt satisfied that the accommodation they would want to meet their future requirements was available in Ashtead. Cementing Ashtead’s reputation as a commuter village it was interesting to note that 83% of those interviewed didn’t work in Ashtead. Even though only 37% saw their future requirements being met in Ashtead, most of those surveyed were keen to live in future in three bed or larger homes – preferably detached but otherwise semi-detached. Those who sought terraced houses (which are in short supply in Ashtead) 45% were looking for two bed properties, while of people who wanted flats 42% were looking for one bed properties.

land and a similar number felt that most development should be within existing boundaries. The largest percentage 38% felt there could be some development both just outside and within existing green belt boundaries. As for next steps, the ACV working group is working on a detailed Sustainability Appraisal of all the Green Belt land surrounding Ashtead village and will be producing a Green Belt Boundary Review. The group is aiming to report its proposals to the Ashtead Forum in the autumn before seeking further consultation from Ashtead residents and forwarding its proposals to the District Council for consideration in their Land Allocation Plan for the district. Sign up for the Newsletter on the website: www.ashteadcommunityvision.org.uk Contact: Andy Ellis 07530 373975 email: info@ashteadcommunityvision.org.uk Find us on Face book Ashtead Community Vision, and Twitter @AshteadCV